Roam the cobblestone streets of a quaint 18th-century town amid a backdrop of rice fields and majestic mountains. Relive the past as you marvel at architectural antiques from the Spanish era.

It is the first resort in the Philippines to be affiliated with the Historic Hotels Worldwide and part of the Conde Nast Johansens Luxury Global Collection. It has also been recently awarded the 2017 Most Excellent Destination Hotel by Asia Awards of Excellence. Unwind in modern luxuries and comfort only at Las Casas Filipinas de Acuzar.

6 Deals You Can Buy Now 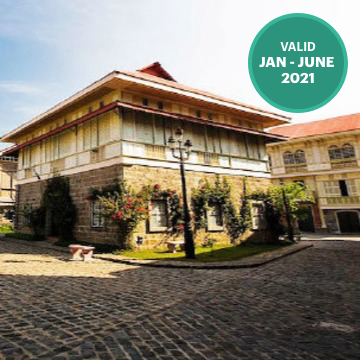 Who It’s For: The brainchild of José "Gerry" Acuzar, after whom this complex is named, Las Casas Filipinas de Acuzar is a one-of-a-kind heritage area. It’s home to 27 meticulously restored heritage houses dating back from the 17th to the 19th century, arranged in a layout typical of Spanish colonial towns from that era. The houses hail from Manila, Quezon City, Bulacan, Pampanga, La Union, the Ilocos region and Cagayan and were all painstakingly dismantled and reassembled in scenic Bagac, Bataan.

History buffs: There aren’t that many places left in the country where you can have access to these many colonial heritage sites within an easy walking distance from each other. Each historic house has its own unique story that deserves much more space than we can give here. If you’re an avid student of history, you should definitely check out what Las Casas Filipinas de Azucar has to offer.

Families: It’s important to give your kids an appreciation of their own unique heritage. Not only does Las Casas Filipinas de Azucar offer that, but it also offers a wide array of fun amenities to keep your kids interested.

Couples: Las Casas Filipinas de Acuzar has a deserved reputation as an excellent wedding and honeymoon spot. You can book a room at the amazing Hotel de Oriente or a private casa for two. With its romantic vistas and relative isolation, you and your partner can get heaps of precious alone time with Bagac’s incredible sunsets serving as the perfect backdrop.

Large groups of friends and family: Las Casas Filipinas de Acuzar has entire historical houses that you can book, accommodating anywhere from 4 to 16 adults. This makes this heritage site an unforgettable place to host those special reunions.

Companies: The Hotel de Oriente can host banquets for up to 600 people. It also has more than enough rooms for company retreats, team-building activities, and other such events.

The Historic Hotel de Oriente: The first hotel in the country was transplanted from Binondo and now serves as a showpiece of the Las Casas Filipinas complex. Philippine National Hero Jose Rizal stayed in Room 22 after his return from Hong Kong in 1892, and it was here where he stayed while he organized the beginnings of what would be the La Liga Filipina. Visually, the Hotel de Oriente is a masterpiece of 19th-century Spanish-Filipino architecture and the team behind its restoration certainly did their homework. The fully-featured rooms don’t disappoint either, featuring all the amenities you’ve come to demand from a modern first-class hotel.

Private casas: Las Casas Filipinas de Acuzar is also host to several smaller heritage houses that could be booked for larger parties as well as for intimate getaways. Each house has its own unique character, but all of them are tricked out with the latest modern amenities.

Walking tour: The layout of Las Casas Filipinas de Acuzar is meant to mimic that of a colonial-era town. Visitors can take a guided tour through living history and get a deeper understanding of how our ancestors lived.

Restaurants: Restaurants serving Spanish, Filipino, and Italian cuisine are on site, giving you plenty of culinary options. One thing’s for sure, you will get hungry after the tour!

River cruise: Visitors are also treated to a cruise of the river that runs through the complex, giving you a better picture of what our ancestors would have experienced during their daily commutes about town.

Cultural shows and activities: There are a number of scheduled shows all over Las Casas Filipinas de Acuzar. Be sure to check the schedules on their official website.

Calesa ride: Nothing takes you back in time quite like the sounds of a calesa’s wheels and horse’s hooves creaking and clopping along a cobblestone path.

Game room: A variety of games are available here for your fun and leisure.

Fotografia de la Escolta: You can book a professional photographer to take photos of you in traditional attire. This is definitely one of the more sought-after services at the complex.

Swimming: A prime piece of beachfront is readily available if you want to go for a swim in the waters off Bagac beach. If freshwater is more your style, a stylized swimming pool meant to look like a natural lake is available.

Las Casas Filipinas de Acuzar is within the municipality of Bagac, Bataan and quite close to many places of interest. A few of these include:

Limutan and Ambon-Ambon Falls: These falls are within the municipality of Bagac. Be sure to look for a qualified guide, as the trails to these falls are fairly rough going.

Death March Marker: There are actually a total of 138 Death March markers, one for each kilometer of the march. These span from Bataan to Tarlac, with the Kilometer Zero marker starting in Bagac. It’s only a very short drive away from Las Casas Filipinas de Acuzar.

Mount Samat National Shrine: A short drive away from Las Casas Filipinas in the neighboring town of Pilar is the Mount Samat Historical Shrine. This shrine commemorates the valor of the soldiers who fought and lost their lives during the Battle of Bataan. You can find the second tallest cross in the world on the site, as well as some historical artifacts and artworks. There’s also a stunning panoramic view of Corregidor Island as well as Metro Manila, weather permitting.