Using solar panel units for lighting, the island reduces its carbon footprint by as much as 6,000 liters of diesel fuel. They also have water catchment as well as proper garbage segregation and disposal systems!

Arena Island is also known for its commitment to marine-life preservation, most notably to the Pawikan or Philippine Sea Turtle. Visit the sanctuaries and learn how they have been helping with the preservation of this precious, endangered species.

2 Deals You Can Buy Now 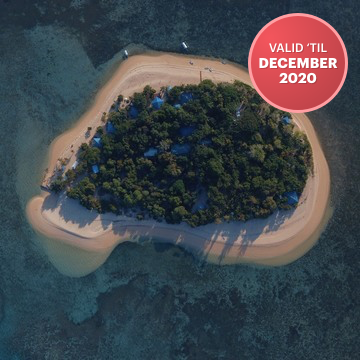 Who It’s For: You’d think that Palawan, which is constantly hailed as the world’s best island, would have no secrets left to hide. That can’t be farther from the truth: just take Arena Island, for example. Many Filipinos haven’t even heard of this four-hectare piece of land nestled atop vibrant coral reefs, but it’s there, and it’s filled to brimming with wonders untold.

With its sparkling shoreline, white sand beaches, stunning biodiversity, and modern comforts, the Arena Island resort may be the best definition of the word “getaway” in all of Palawan. Tucked away from busy tourist destinations, this tropical haven is the perfect escape from the bustle of city living.

Lovers on Vacation: Secluded, quiet and absolutely romantic, Arena Island is the perfect hideaway where you can spend time with your special someone.

Families: Happy times strengthen family bonds. When you visit Arena Island with the family, you’re sure to be treated to gorgeous tropical scenery, service with a smile, and ecological spectacles that only an undisturbed island can offer.

Groups of Friends: If an adventure like no other is what you and your friends are craving, Arena Island has it all. Enjoy pristine, turquoise waves, swim with a dazzling array of fishes in the reefs and visit the sea turtle sanctuary for an unforgettable time. In the evenings, enjoy mouth-watering treats, and then sleep soundly as you’re serenaded by the waves and wildlife.

Company Employees: Turtles aren’t the only ones who can enjoy Arena Island’s sanctuary. Weary city dwellers can also seek refuge in this tropical paradise and melt their worries away. The island’s offerings are sure to take your mind off the grind of the metro, helping you recharge and come back totally fresh afterward.

Arena Island has several features and amenities to make your stay as comfortable as it is exhilarating. These include:

Beachfront location: The island boasts of kilometers of white, sandy and clean beaches where you can bask in the sun or bathe in the pristine seawater. There’s no effort involved as the Arena Island hotel is right at the beachfront, just a short walk away.

Turtle Sanctuary: The island is one of the few places where the endangered Pawikan (sea turtles) still have a safe place to call home. Fortunately for us, we can watch them in their natural habitat at Arena Island without being invasive and without worrying that we’re harming their territories.

Cozy Rooms: With soft, adequately sized beds in air-conditioned rooms, you’ll sleep peacefully after a long day of sunbathing, snorkeling, and dining. Each room also has a TV set and a phone for your entertainment needs and room service requests. For sudden cravings for sweets or drinks, the mini bar is within arm’s reach.

Breakfast Included: There are few conveniences quite as good as waking up knowing that breakfast has already been made for you. That’s what Arena Island has in store. From local favorites to international staples, the hotel has you covered for the most important meal of the day.

Airport Transfers: Arena Island is easily accessible from Puerto Princesa, Palawan’s capital. Shortly after landing, you’ll be on your way to Arena Island over the water and into the hotel.

It’s hard to run out of things to do in and around Arena Island. Here are some of the favorites among local and international tourists:

Estrella Falls: Scenic, fast-moving and pristine, the Estrella Falls is a must-see especially if you’re visiting the Arena Island area for the first time. This freshwater feature inspires a relaxing mood in a backdrop that exhibits the natural beauty of Palawan.

Palaweno Brewery: Whether you’re a beer drinker or not, you should drop by the Palaweno Brewery. This is the island’s first and only craft beer making facility and is a great educational experience if you choose to tour it.

Tabon Caves: As historic as they are wondrous, the Tabon Caves were once home to early Filipinos. The caves are found in Lipuun Point, in the municipality of Quezon in Palawan. If you appreciate history and anthropology, this is a can’t-miss opportunity to see what’s often referred to as the Philippine Cradle of Civilization.