The bus to Zambales wasn’t leaving for an hour and a half—a surprise for the chronically tardy.

Tardy, a fair description of what we are, my cousin and I. Impulsive, the most polite. Spontaneous, we preferred. Careless, more like, our mothers argued. Unprepared! And we were. But we swatted away our mothers’ worried tutting and got a ride to the Victory Liner station in Cubao, disappointing girl scouts everywhere because our backpacks were lighter than they should have been. A bumpy bus to San Antonio, Zambales and tricycle ride later, we were in Pundaquit beach, where we chartered a bangka. We were determined to make the most out of our ride by visiting at least one more island, Capones, famed for its seclusion and its 19th century lighthouse. But the waves were too rough, and our bangkero was forced to anchor at the wrong side, the non-lighthouse facing side. We went down anyway, and discovered that Capones was home not just to a lighthouse, but to a graveyard as well. It was where footwear came to die. And not just your standard flip-flop: there were sneakers and ballet flats, sandals, baby shoes. None with a pair, all in varying states of buried. They were the island’s sole occupants. Losing your shoes was just another price to pay for having itchy feet.

And then we found ourselves in Anawangin. It was a cove, half-moon-shaped, its surface wrapped in pine trees. The sand wasn’t fine but silty. Remnants of volcanic ash from Pinatubo’s explosion two decades ago speckled it with silvery grey. The rabid, frothy waves petered out on their way to the shore, the outer edges of the cove having already borne the brunt of their rage.

The beachfront was where the locals of Anawangin lived, the gatekeepers of the island. You had to get further in to reach the campgrounds, in the forest. One had to cross a narrow bridge fit only for single file, all wooden planks and exposed nails. Beneath it was the river. In the heat of the afternoon, it was shallow and patchy and easy enough to wade in if you wanted to. We chose a most inconvenient spot to pitch a tent (far from the tiny bathroom and the locals whose kitchenware we needed), but we didn’t care; it was the quietest and most scenic. To get there, you had to cross two bridges—one entering dirt-floored tent city, and another elevated one leading to greener expanse. We only had one other neighbor, a large barkada of thirtysomethings who left us to our own devices. We went exploring a while after that, in tops and swimsuits, shedding our shorts to wade in the river and follow it into the heart of the forest. 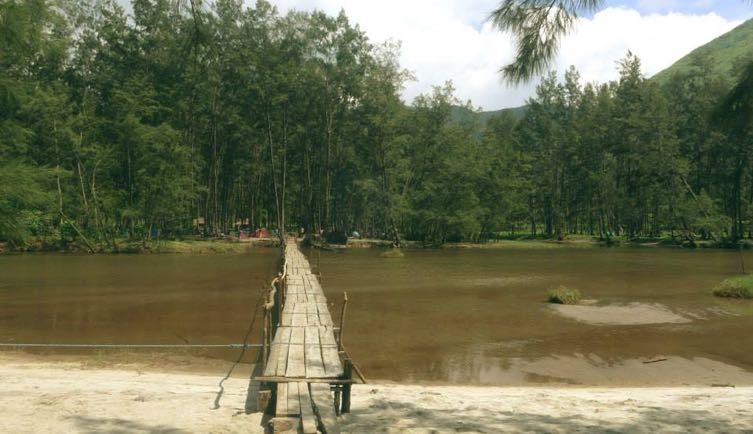 On the menu for dinner was canned adobo and tuna. Grilled tomatoes and eggplant too, if we ever got a fire started. Our neighbors had a pot of real, legit adobo simmering under a steady campfire, and we were sitting on our asses looking for dry wood, thanking the heavens we had at least thought to bring matches. We squatted on the grass, quizzically throwing lighted matches at a bunch of twigs and wondering why it wouldn’t catch fire. When the flame lasted for a few seconds, we aggressively fanned it and doused it with rubbing alcohol, confident that this time it’d take. But of course it didn’t. After a while, it started drizzling. We were optimistic. “It will let up,” we told ourselves.

It was pitch black and stormy by the time we had dinner. We crossed the bridges soaked to the bone, still in swimsuits. A flashlight was our only light source. One misstep would’ve sent us plunging to our deaths in the rushing river suddenly revived by the outpour of rain. Finally, the locals took pity on us and gave us rice and a place to cook. We ate in silence. The next day, we woke up earlier than usual, in pursuit of the unnamed waterfall we’d heard of over dinner. We trekked on our own, equipped with nothing but a camera. There was a definite path at first, brambly and narrow, one we tread for fifteen minutes until we reached a clearing. We turned back in a few attempts to go further later, fueled by fear.

But we heard voices and a rustling. A group was being led to the falls. Casually, we let them pass us by, trailing them until we reached our destination. It was an arduous trek as we zigzagged through lush bushes and slippery streams, toes curling so as not to lose our slippers. And finally, there it was. It rose in levels, the highest one accessible only through carefully climbing a set of boulders at the side. The unnamed falls were perfectly framed by bamboo trees swaying to the breeze, and its uppermost level was blindingly golden, illuminated by the sun. The water was glacial and clean, the closest we’d had to a bath the whole weekend. We relished in the solitude, half-expecting a diwata to appear.

Yes, we’d learned our lessons: come prepared, don’t assume you have natural instincts to trust, bring more than just clothes. But despite all that we’d fumbled on. Getting to the falls felt like a victory, triumph over doubting locals and nagging mothers. It was a reward for having a sense of humor, for improvising, for living a little, for leaving for a little—it was as if someone out there was telling us to keep chasing those waterfalls. Who were we not to listen? 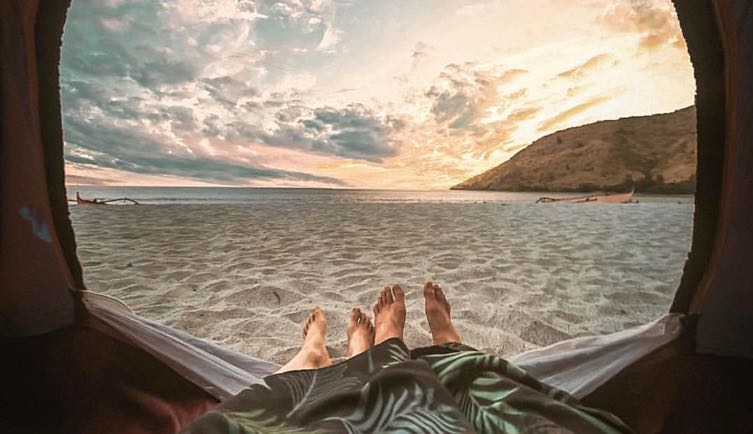 How to Get to Anawangin

Commuting to Zambales by bus is the best option. Hop on a Victory Liner bus bound for Iba, Zambales at the Cubao, Pasay, or Caloocan terminal. Travel time is 4-5 hours. Get off at the San Antonio Public Market, where you can also purchase supplies for your trip.

From San Antonio, make your way via tricycle to Pundaquit, which is where you can board a boat that will bring you to Anawangin Cove, with optional side trips to other beaches and islands such as Capones and Camara. The boat ride takes approximately 20 minutes. Alternatively, you can go on a 5-6 hour trek through Mt. Pundaquit.

If you want to avoid the crowds, November to February are the best months to visit.

Looking to explore more of Zambales? Get started with these 16 Zambales Resorts You and Your Crew Can Drive to This Weekend.

About Chili
Chili is neither as spicy nor as cool as her name suggests. 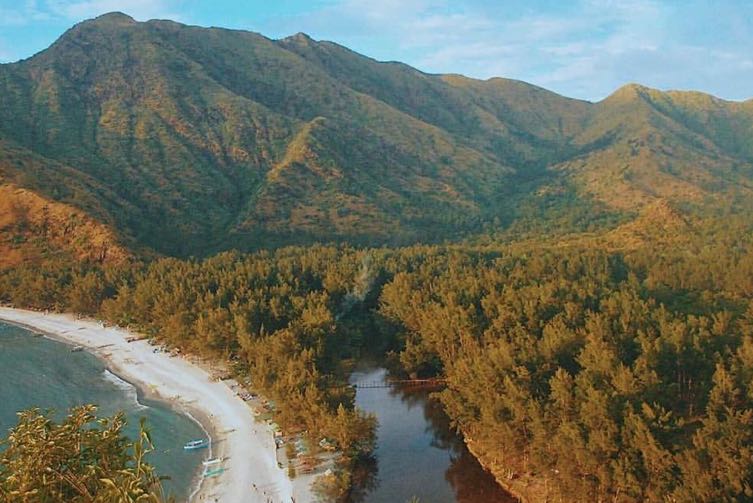