Sagada: A Secret I Wish I Could Keep

Three years ago, my father drove us all to Sagada one blustery day in March. It was the onset of summer and yet, in Manila at least, the rains had been pouring. We rarely did things like that as a family—“that” being traveling together—and so everyone was kind of excited. About ten long hours after we’d set out from Manila, tired but alive, we walked up to our villa in Sagada, an inconspicuous but roomy two-storey house called Alapo’s View Inn. It was 2015, and much has changed since then, but at that time it was literally just someone else’s house. There were a dirty kitchen sink, a grimy bathroom, and a gas stove we couldn’t quite understand how to turn on, but the house was cozy and I liked it. I fell asleep that night cradled by Sagada’s cool air, a wonderful escape from the heat and smog of the usual Manila eve. 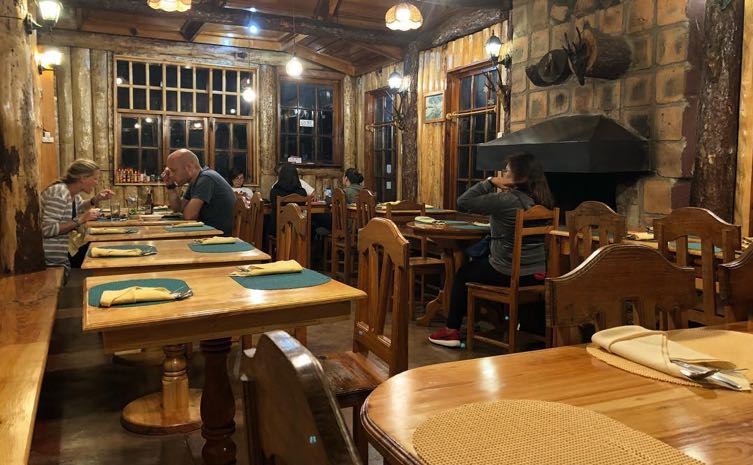 Breakfast the next morning was at a restaurant eponymously named Log Cabin Sagada, a fancy little eatery decorated with wooden Ifugao carvings and framed pictures of mountain scenery. With red tablecloths and warm, low-hanging lights, it has all the old-world charm of a 1940s Christmas card. After some Sagada hot chocolate, a plate of pancakes, two omelettes, and a slice of cake, we were on our way to the Sagada Municipal Tourist Information Center.

Just a few steps down the road, it is where everyone goes to pay for environmental fees and to meet with a local who will act as a tour guide. And guidance, I learned, was a must, as it’s not easy getting around the undulations of Sagada—something I realized as soon as my family and I descended down the dark, gaping mouth of Sumaguing Cave. I had never gone caving before. We asked our tour guide if it was going to be easy and he’d said yes. But then again, this was a man who seemed to effortlessly glide up and down the sharp, mossy rocks in flip-flops. A side note and cautionary tale for anyone who has ever avoided nature as much as I have: the trip down Sumaguing Cave is a long and treacherous one, but well worth it.

There will be panic involved in the slow descent as well as other fun things like bat shit, moss, and spelunking. When you reach the bottom, however, it will all be worth it as you wade knee-deep through the crystal clear water and marvel at the smooth rock formations that have somehow managed to unfold themselves from the very earth you are standing on. 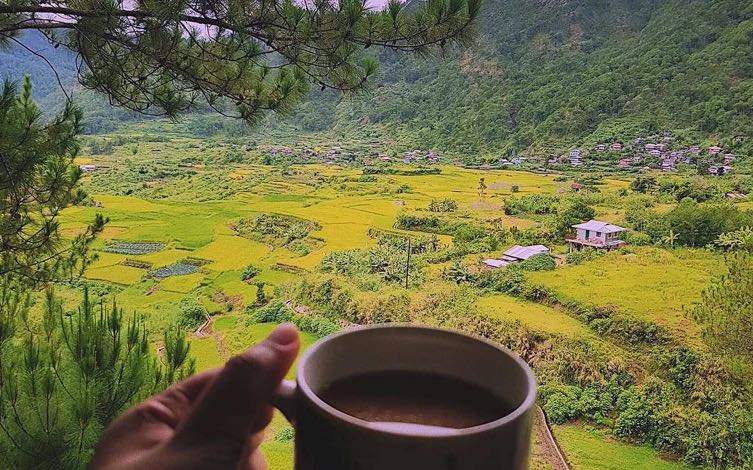 By the time we climbed back up to the sunshine, I was tired, hungry, and uncomfortably wet. Thank God it was lunchtime. We made our way to the Gaia Sagada Cafe (local film buffs will recognize it from That Thing Called Tadhana). A wooden nipa hut on the edge of a mountain, Gaia offers more than just gorgeous views and that breath of fresh air Mañilenos have long forgotten. They also have the best organic food proudly made with love and local ingredients.

I recommend the Miki Mi Na (Sagada-made squash noodles, similar to pancit canton but healthier), the Peanut Butter and Banana Sandwich, and of course, any meal paired with their famous Sagada mountain rice. Tourists being tourists, we also had to drop by two other famous and eponymously named food establishments: the Sagada Lemon Pie House and the Sagada Yoghurt House. I guess I don’t have to tell you what those places are famous for. 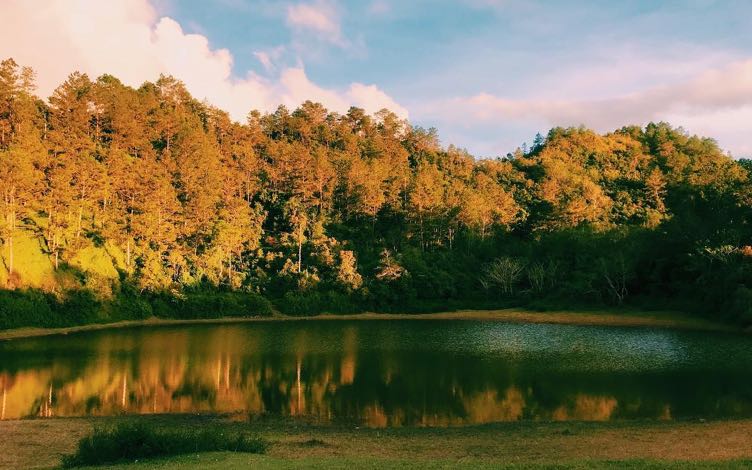 The rest of the day was spent sitting on the green, green grass by Lake Danum—amidst large pieces of cow shit, the lake shone brightly in the afternoon sun—and then trekking around the area watching the sun shine through the pine trees.

The komorebi (a Japanese word for sunlight that filters through trees) in Sagada is gorgeous, and when the light catches the coffins that hang from the mountains, it is all the more wondrous for its mystery. 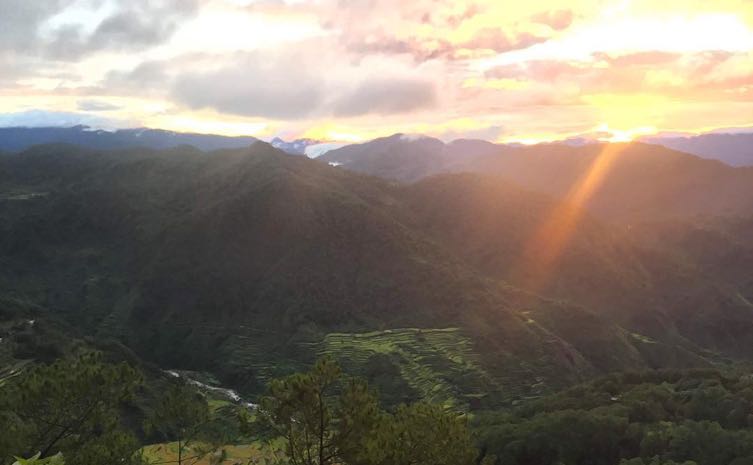 The next morning at 4 AM, we packed our things, got back into the Crosswind and drove out of town. We’d tried to catch the sunrise at Kiltepan but had gotten lost on the way and decided against it. But it didn’t matter, because the disappointment didn’t last long. By 11 AM, the sun was shining down brightly and my family and I stood precariously at the edge of the world, looking down onto the Banaue Rice Terraces. We’d missed seeing it the night we drove up because of the darkness but suddenly, there it was under the blinding sunlight, as gorgeous as I had expected it to be.

I had no expectations of Sagada. All I knew was that I was excited to be there, but it was terrifying at the same time, in that exhilarating kind of way because Sagada is nature at one of its sincerest manifestations. There are unforgiving terrains, magnificent waterfalls, and coffins that hang from rocky cordilleras. There are beautiful sunrises and blustery winds, the kind that keeps you shivering at night.

Unlike Baguio, Sagada is relatively untouched: there is that one main road that leads everywhere; the wind is fresh; and unlike the mountains in the City of Pines, the ones in Sagada are not bald. But in recent years, Sagada has had an influx of tourists both from the local populace and from the community of international adrenaline junkies. I like this, I like that they recognize Sagada as the beautiful place that it is, but at the same time, I kind of don’t.

I would have wanted to keep Sagada a secret, one that only my family and I knew. But it’s too late—people have heard about the lemon pies and the coffee beans and have flocked to Sagada in droves, in the hopes of breathing all that fresh air and taking in all the gorgeous sunlight that passes through the leaves of the pines.

And really, who can blame them for wanting a little piece of that?

About Ryanne
Ryanne reads and writes and hopes to one day get paid for doing nothing but these. She tries to be funny and eats a lot of cake. Follow her @rynnco5 on Instagram for amateur travel photos and obnoxious selfies.