The winding road to Sagada is definitely worth the drive.

Made famous by the movie That Thing Called Tadhana, this mountain enclave north of Baguio City used to be a popular destination for mostly foreign travelers. But with the movie having generated interest among Filipinos, local tourists now frequent the place as well. A break from the hustle of the city, the fresh, pine-scented air is not the only thing that will leave you wanting more. This unique mountain town is anything but ordinary, and these five fascinating facts I learned from my visit will make you want to save your next long weekend for a trip up north.

1. Only the F.B.I. (Full Blooded Igorots) may be buried in the famous Hanging Coffins of Sagada. A short hike from the town’s cemetery, the Hanging Coffins of Echo Valley are a cultural emblem to the people of Sagada. Only full-blooded Igorots may be buried under this tradition, with the smaller coffins containing not infants but the actually the oldest members of the community. “Born in fetus position, and in fetus position they return,” my tour guide told me.

How much does it cost to be buried here? 0 pesos and the strong spirit of bayanihan. When a member of the community passes, every member does their share of the work. From the building of the coffins, to the cooking for and feeding of those who would like to pay their respects, the entire community pitches in to help. It doesn’t stop there: When transporting the coffin to its final resting place, it is tradition to form a single-file line from the entrance of the cemetery to the place where the coffins are hung, and starting with the deceased’s relatives, the members of the community would pass the coffin along until it reaches its final resting place. It is their belief that in doing so, knowledge and good luck are passed on to the living members of the community. 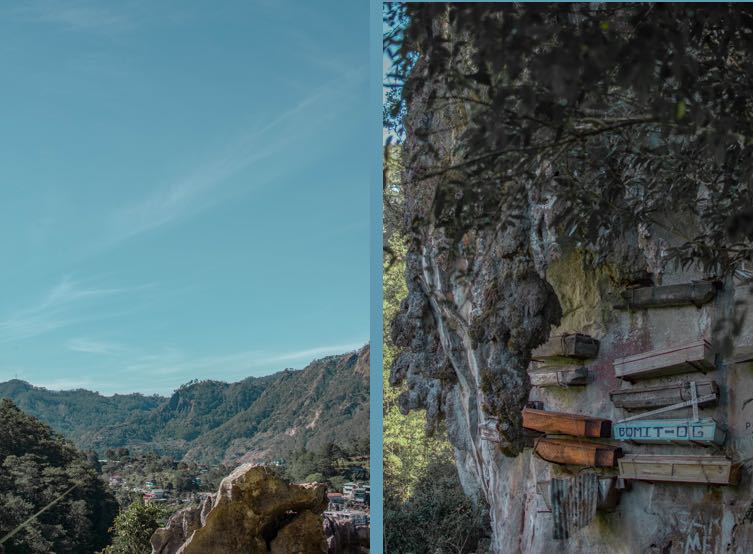 Bonus Fact: A member of the SAF 44, P03 Noel O. Golocan, is buried in nearby Calvary Hill. Written on his tombstone is this poem:

I did my duty, I paid the supreme price
I pray you’ll remember my sacrifice
My life was short, I did my best
God grant me peace in my eternal rest.

2. The journey to Bomod-ok Falls, a 200-ft column of water, is a two-hour assault down a mountain, into a valley, and through rice terraces. When I say that the journey is breathtaking, I mean it both figuratively and literally. Even with rest stops and cemented parts of the trail, I still found myself gasping for air as I traversed through the narrow, uneven passage to the falls. In the end, as I stood at the foot of the falls, it was the mighty roar that truly took my breath away. DG Traveler Tip: Though it is possible to take a dip in the waterfalls, would you really? The temperature in Sagada can drop to 8°C!

3. Barangay Fidelisan, located in northern Sagada, is the first barangay in the area and home to friendly locals. 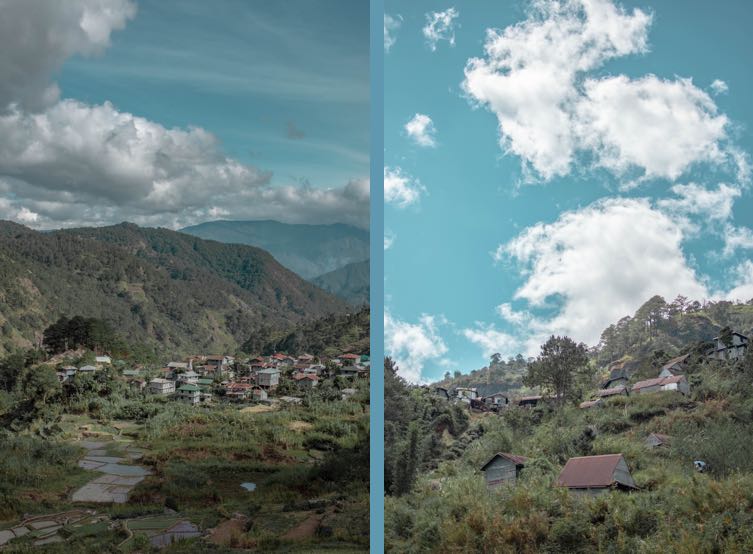 Sagada’s population has now boomed to around 12,000 inhabitants, and to think it all started in this little barangay in the valley of two monstrous mountains. There are now 19 barangays surrounding it, each with its own story to tell, such as Barangay Aguid which is known for its rice terraces, and Barangay Bangaan, where there used to be operational gold mines.

Fidelisan is the only barangay in Sagada that still does not connect to the main road. Its seclusion is both a blessing and a curse; while there is peace and serenity with nature, the only way in and out is through a grueling one-hour hike.

The barangay is also a halfway point for anyone wanting to visit Bomod-ok Falls. Fidelisan’s resident children are friendly to tourists, offering use of a comfort room, some basic goods, and other necessities to keep you on track along your journey—all at a minimal price. 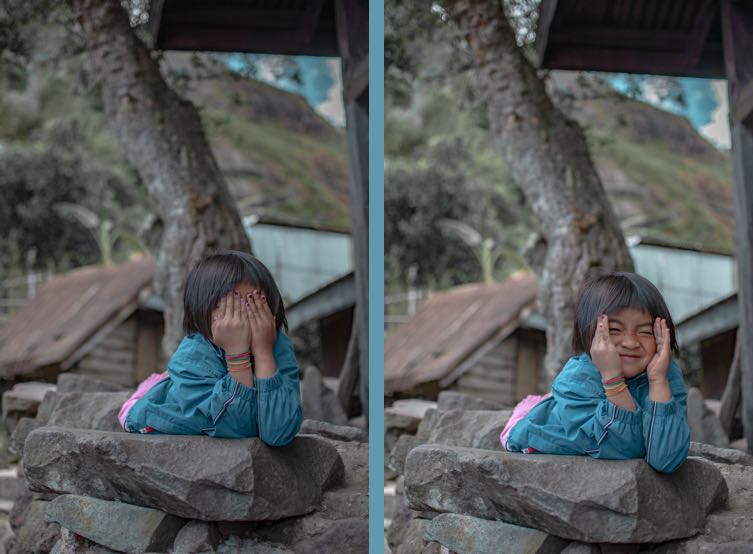 4. The Etag Festival allows the locals to celebrate their indigenous culture and traditions. Introduced in 2011, this festival aims to promote the culture and practices of the indigenous people of Sagada. This year, it was celebrated from January 31 to February 3, with festivities including a weekend of games and activities at the town square. It was an eventful weekend as the town was painted in colorful banderitas, and the lively spirit of the locals filled the air. DG Traveler Tip: If you plan to attend next year, expect shops to close much earlier during this time.

The festival derives its name from “etag,” which is preserved pork meat marinated in salt and smoked over a low fire. Another version of the dish involves the meat being sun-dried for days, then left in a box for several months to a year before it is consumed. While there are different variations in preparing this dish, this native way of preserving pork has become symbolic of the Cordilleran culture.

5. A part of Sagada is covered in blue soil. Kaman-utek Hills, or more popularly known as Blue Soil Hills, glows blue due to the high concentration of copper sulphate in its soil. During the rainy season, the Kaman-utek Hills takes on an even more vibrant blue. When it rains, the topsoil gets washed away, unraveling the soil’s deeper hues.

The hills are an hour-long hike away from the famous Marlboro Country, the popular spot where photographers usually take a photo of a sea of clouds rolling beneath them. Before heading to Kaman-utek Hills, make sure to catch the majestic sunrise from Kamanbaneng Peak, and enjoy a full panoramic view of the Mountain Province.

Planning to visit Sagada for the first time? Get tips on where to stay, what to do, and what to eat here.

About Enzo
With a heart for the Philippines and a soul for adventure, Enzo believes his purpose in life is to conquer all 7,641 islands of the country with his trusty Nikon. Living in the city doesn’t stop him from wandering the mountains and beaches, while telling stories of those he meets along the way through photography. Follow Enzo’s photo-venture through his Instagram @lorenzoarceo Features Sagada: A Secret I Wish I Could Keep 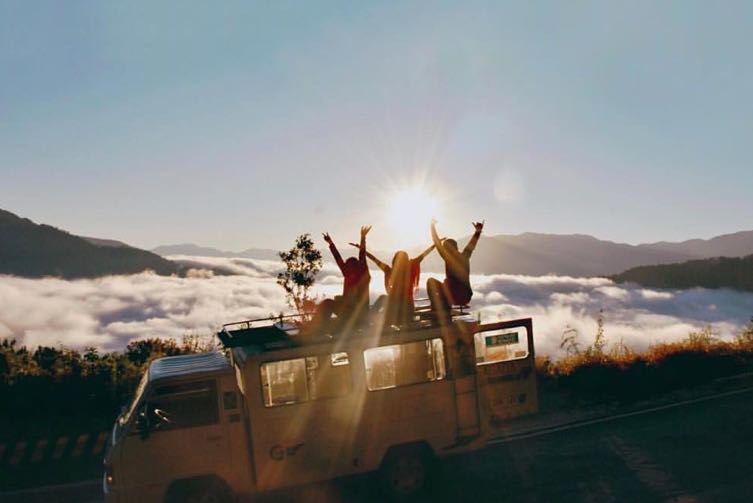 Features A First-Timer’s Guide to Sagada