Mayon Volcano’s History Has a Story to Tell

You heard about it from your classes back in grade school. Mt. Mayon, the perfectly cone-shaped wonder of a volcano in Bicol, is one of the Philippines’ greatest attractions. But what you can see and read from the pages of your textbooks couldn’t do justice to one of the most interesting volcanoes in the world.

Here are some fascinating stories about Mayon you probably missed out on: Mt. Mayon is situated in the Bicol Region, particulary in Legazpi, Albay. The volcano is referred to in those parts as “Bulkang Magayon” which literally translates to “beautiful volcano”. They say that the name of Mayon comes from an ancient regional folktale about a princess named Daragang Magayon. The princess, whose name means “beautiful maiden” in Bikolano, was part of a Mayon-sized love triangle between two opposing warriors. The battle pitted the love of her life against his archrival, with the two laying siege on the grounds where the volcano now stands. Magayon ran towards her lover upon seeing him wounded in the clash. Both of them were eventually surrounded by the enemy, and so she stabbed herself in the heart while her lover died in her arms. The story goes that they were buried on that exact spot, and as time went on, the land had risen to form what is now Mayon Volcano. It is believed that the spirit of the princess rests within the volcano, while the clouds that engulf it belong to her beloved. In remembrance of this tale, the region of Albay celebrates the Daragang Magayon Festival every year.

Looks That Can Kill 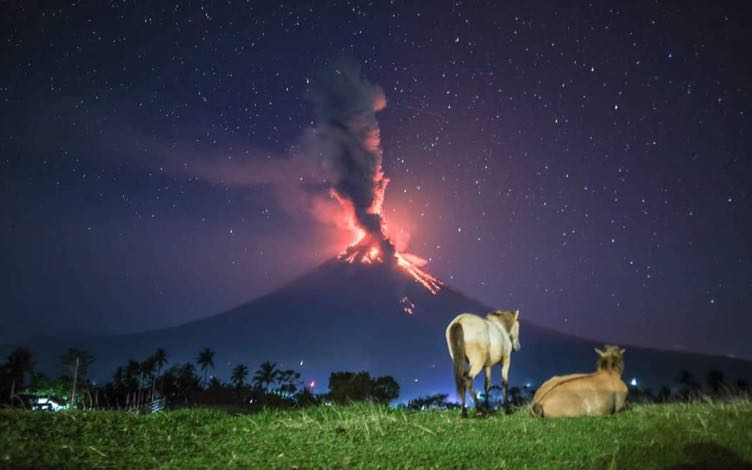 Mt. Mayon may be the best example for the saying that looks can be deceiving. The volcano still makes headlines every so often, for reasons other than its grandeur. While Mayon is renowed for its beauty, the volcano has had its fair share of deadly eruptions throughout history. It has erupted 52 times in the past half millenium, dating back to the first recorded one way back in 1616, chronicled by Dutch explorer Joris van Spilbergen. For comparison, the famed mount Vesuvius has also recorded over fifty eruptions, but has only done so a handful of times within the past hundred years, the last one being all the way back in 1944.

Earlier this year, Mayon was in the news for renewed activity once more. It was the 4th time in the past ten years, solidifying Mayon’s status as the Philippines’ most active volcano and one of the deadliest in the world.

The Year without Summer The most destructive eruption in Mayon’s recorded history occurred in 1814, more than two hundred years ago. The eruption overwhelmed and destroyed dozens of villages within its surrounding area with an outpouring of hot gas and volcanic lava. The beautifully cultivated slopes of Mayon were buried beneath a steaming sheet of sand and ash.

The eruption was so strong that it contributed to what they called the 1816 “Year without a Summer”, along with the explosion of Mount Tambora in Indonesia in 1815. The amount of ash within the atmosphere due to volcanic activity blocked out the sunlight, leaving the world in a perpetual winter for an entire year.

The Tragedy of Cagsawa Ruins The most tragic casualty in Mayon’s explosive history would have to be Cagsawa church. During the major eruption in 1814, residents of the town of Cagsawa were made to evacuate. The priest of the local church ordered the bells to be rung in order to warn the townsfolk of the impending disaster. However, due to the abrupt nature of the eruption, hundreds were forced to take refuge within the closed doors of the convent. The lava stream and accompanying ash proved to be too much and engulfed the church where it stood.

The site remains as one of the most picturesque vantage points of Mayon today. The blackened ruins of the church tower stand tall to this day, serving as a reminder for both the beauty and calamity that surrounds it.

Mayon As We Know It Today, the area that surrounds the volcano is considered the Mayon Volcano Natural Park and remains a protected sanctuary to preserve its pristine conditions. Despite the obvious dangers, the nearby vicinity of Mayon Volcano is still inhabited by thousands of people and visited by thousands more. The fertile soil and bountiful harvests keep locals happy, while tourists from all over still flock to the mountain to climb its slopes and take in its views.

Mayon serves as one of the most popular tourist attractions in the country and offers a challenging trek for adventurous hikers. The climb usually takes 3-4 days and features a 40-degree ascent on lose volcanic cinder as you approach the summit. The history that surrounds Mayon makes the trip that much more meaningful.

Thinking of planning a trip to take in the scenery yourself? Check out our Bicol page here to score some great deals when you visit.

For other exclusive deals, steals, and more stories, sign up for Deal Grocer!

About Renzo
Renzo spends most of his time trying to enjoy his two great loves: Food and Sports. A fresh new restaurant or a quick pick-up game of hoops will get him out of the house. He’s an avid fan of the Washington Wizards, and hopes to be able to buy the team someday. But for now, he’s currently in law school, trying to make his dreams come true.