How to Enjoy Baler Without a Surfboard

Every year, a multitude of the young and fun-loving flock to the beautiful seaside town of Baler, Aurora, hoping to catch a good break.

But for those who don’t consider themselves surfers, the Baler scene can be a bit intimidating. If you aren’t much of an adrenaline junkie or if you’re simply looking for the kind of itinerary that doesn’t involve riding waves, here’s a list of things you can do in Baler that are just as fun and memorable. No surfboard? No problem.

Catch the Sunrise at Sabang Beach 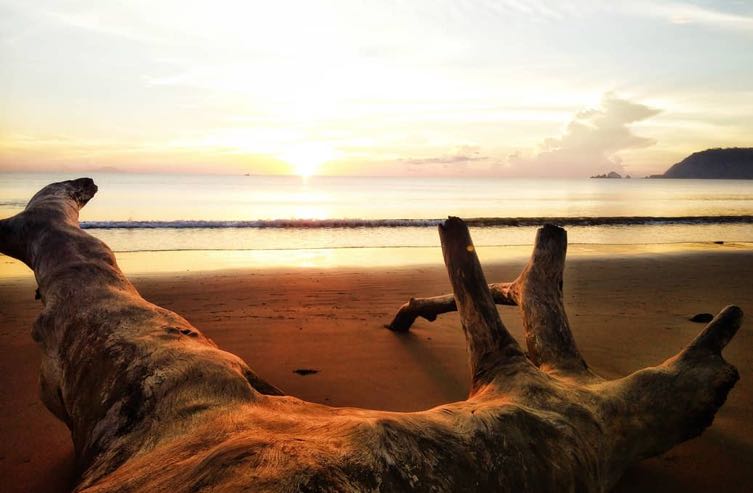 Sabang Beach, one of Baler’s more popular seascapes, is where everyone goes to learn how to surf. If getting on a board isn't on the agenda, then try getting up early to watch the sunrise on the beach instead. Sabang’s location on the eastern part of Luzon assures any sun-chaser a wonderful view, especially early in the morning when there aren’t as many people along the shore.

Go on a Food Trip If you love seafood and bars by the beach, Baler is the perfect place. You probably know all about Baler Surfer Grill: the beachside staple located by the shores of Sabang Beach. But while you’re there, take time to discover other restaurants like Ram’s Tapsilog, Kubli Bistro, and Uruhu Bar. Although we don’t have to tell you what Ram’s Tapsilog is famous for, people do seem to love their torta silog and longgasilog as well. Kubli Bistro is a newer restuarant in the Baler food scene, specializing in more Westernized gastronomies. And lastly, Uruhu Bar is a beachside tiki-themed bar where you can enjoy your beer under gorgeous palm trees. Our former president and Father of the Filipino Language, Manuel L. Quezon, was born in Baler—and the entire province of Aurora was named after his wife. Needless to say, there are many places you can visit here that will school you on their history. Start by going to Quezon Park, where you will be greeted by a bronze replica of the former president himself. Within the park you can also see a replica of the house Quezon grew up in, as well as the presidential car he used during his term as president. A few steps down the street from Quezon Park is the Museo de Baler, where for only ₱30, you will be transported through Baler’s rich historical timeline. Right across the street is Baler Church, a simple stone and brick building that has undergone numerous renovations and is also site to the Siege of Baler. It was where 54 Spaniards found themselves trapped one June day in 1898. Nearly a thousand Filipinos surrounded the church, which the 54 Spaniards were using as a fort, to demand their surrender, succeeding only after 11 months. The Aurora Quezon House is a mere stone’s throw away from Baler Church. Although it’s just a replica of the house Aurora Quezon grew up in, it’s not any less interesting.

All of these are found along Quezon Street, Poblacion, Baler, Aurora. The apex of Baler and one of the most picturesque places in the entire province, Ermita Hill has become a popular cornerstone for local tourists. At the bottom of the hill, you will see the Tromba Marina sculpture, a work of art that commemorates a deadly tsunami that took place in the 1700s. From there, you have the choice of either climbing the stairs or driving up to the viewing deck where you can catch a panorama of Sabang Beach and the Pacific Ocean. Along the viewing deck, you can also see a chapel, as well as what appears to be an escape tunnel used by moro bandits in the 1500s. If you’re ready for another hike, then consider climbing the 300 steps to the White Cross. Although difficult, the journey is peaceful and a wonderful opportunity to commune with nature. Imposing and magnificent at more than five storeys in height, this 600-year-old balete tree is straight out of a storybook (or a horror movie). You probably know that balete trees aren’t something to mess around with—supposedly being the home of engkantos and all—but if you’re down for a one-of-a-kind experience, head on over to the Millennium Tree in Baler. You can climb it and even go inside of it. At the base of the tree is a gap big enough for one person to enter at a time. Strangely enchanting but also kind of creepy, the view within is a tangle of vines and roots that’s sure to be an otherworldly experience, to say the least. Somewhat of a secret, and privately owned by the late former senator Edgardo Angara, Dicasalarin Cove is a beautiful, secluded paradise with off-white sand and turquoise blue waters. Open to guests at ₱300 (if you aren’t a guest of Costa Pacifica, the resort nearby), it is the perfect spot for snorkeling thanks to the coral reefs and abundant sea life just beyond. Of course, you have to be a strong swimmer to snorkel here, as the sea floor drops quite abruptly a few meters out into the ocean. Bring your own gear and enjoy the sun, sand, and surf without the hordes of sunbathing revellers so prevalent on other beaches. It’s not just beaches that you can see in Baler—the province is also home to Ditumabo Falls. Imposing and majestic at 140 feet, the water that cascades down these falls comes from the Sierra Madre. The journey isn’t easy, but it’s definitely well worth it. From Baler, you can take a tricycle to Barangay Ditumabo and trek for approximately an hour through rivers and stony pathways.

Find your Equilibrium at the Baler Hanging Bridge 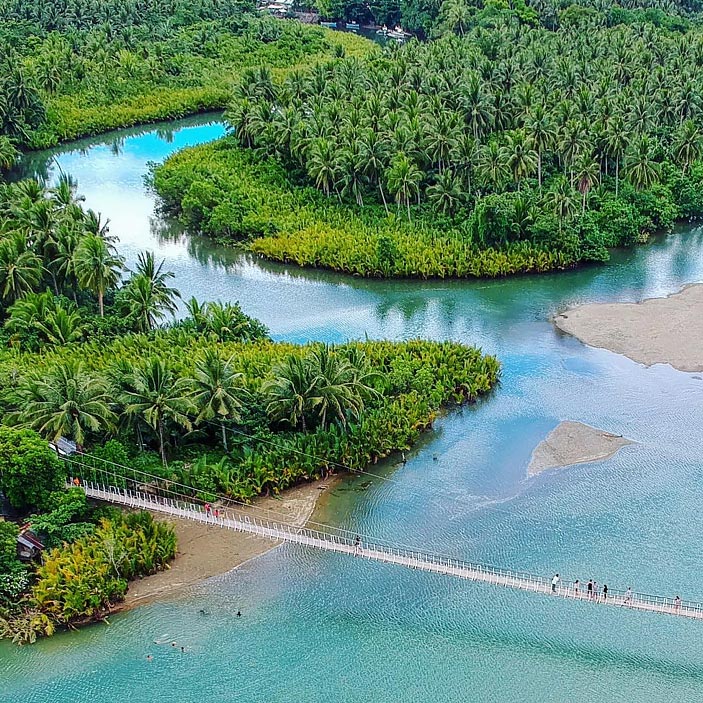 Constructed as a link between two barangays, the Baler Hanging Bridge was never meant to be a tourist attraction. But start crossing over to the other side and you’ll soon find out why it’s become so popular. Offering a turquoise view of the Tibag-Sabang River, this steel cable footbridge is both a wonderful viewdeck and a cute photo op waiting to happen—as long as you keep your balance. Just don’t forget to let other people pass through!

Find travel inspiration for this beach town when you check our Baler Travel Guide.

About Ryanne
Ryanne reads and writes and hopes to one day get paid for doing nothing but these. She tries to be funny and eats a lot of cake. Follow her @rynnco5 on Instagram for amateur travel photos and obnoxious selfies.