Discover Why This Beach is Called “The Boracay of the North”

When life in the fast lane becomes too much, a getaway to refuel the soul works wonders in recalibrating your perspective. Stumped on where to go? Pagudpud, a hidden gem in Ilocos Norte, offers postcard-worthy sights without the bustling crowds of a commercialized tourist spot. From pristine waters to rich greeneries, the wonders of this tropical escape allow you to truly appreciate the pure beauty of nature and the delightful simplicity of life.

Pack your bags with this Pagudpud starter pack and get ready to hit the reset button!

Where to Stay in Pagudpud

If only for the sound of the waves crashing against the sand, a hotel set up by the beach is a must-try for tourists. Choices come aplenty, so it’s better to consider each resort’s specialty. With rates starting at ₱2,500 for two people, King Fisher Resort suits extreme sports enthusiasts, offering exciting water sports like paddle boarding and kite surfing. For rooms with a view, check out their bungalows that overlook a wind farm. King Fisher Resort also has good news for dog lovers: there are puppies at the guesthouse and they are definitely too cute for life!

If you’re a foodie, you’d want to stay at Casa Consuelo, which offers rooms starting at ₱2,500 for two guests. The sprawling combination of sand, sea, and sky is only rivaled by the food served in the hotel’s restaurant, La Cocina de Consuelo, where you can get fresh seafood at an affordable price. We recommend trying their dinengdeng or mixed vegetables and fried fish served in fish sauce broth, and their seafood platter so you can sample all that island life goodness.

For a more budget-friendly stay, Tartaruga’s Hotel offers a comfortable room for three starting at ₱2,200. It’s only two blocks away from the beach. Plus, their café is a coffee lover’s paradise—the beans are homegrown and used to create a satisfying selection of brews.

For a full Pagudpud experience, the local families also provide homestay options, which may already include meals depending on your arrangement. Homestays can make both your wallet and the community happy, and you have your foster family to ask about activities and spots that only locals know about. The scenic picture that coconut palms, crystal waters, and two kilometers of white sand create is only one of the many things that make Saud Beach the queen of Pagudpud’s beaches. From the colorful fish and corals to the peace and quiet, the experience is quite priceless; it’s a good thing the entrance fee is only ₱20. Although it’s a photoshoot haven, Saud Beach isn’t usually flocked by tourists. You won’t find a party scene in the vicinity, so it’s all romantic walks on the beach, chilling with friends, leisurely swimming, and beach-bumming—you know, just heaven on earth. Just like Saud Beach, Maira-ira Cove features picturesque views and surfing waves, but the latter’s trump card is its glowing blue lagoon. At its northernmost part lies two islets named “Dos Hermanos” after the legend behind them. Locals say that the little islands are reincarnations of two close brothers who mysteriously vanished when they got caught in a storm while fishing. As if a mythical bromance weren’t enough, guests can also walk to Dos Hermanos from Maira-ira Cove on a low tide and witness the beautiful diversity of aquatic life. 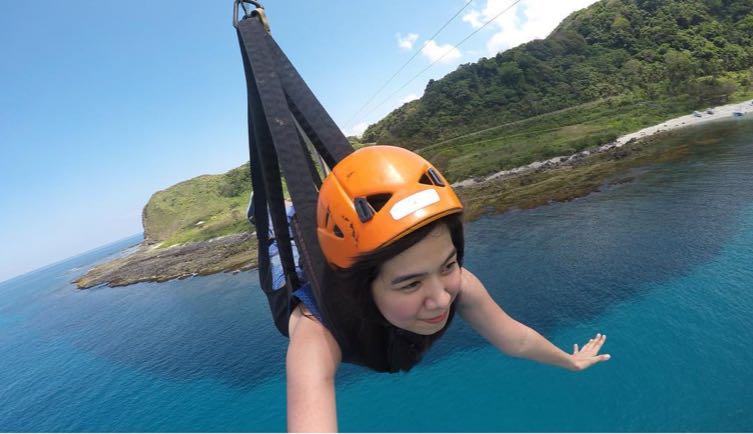 For the ultimate adrenaline boost, guests may also ride on the zipline that stretches for 1.2 kilometers across the blue lagoon (because who can even get enough of that wondrous sight?). At ₱800/head, you can experience this fun and safe adventure at Hannah’s Beach Resort, one of the private resorts in the area. DG Tip: Don’t forget your GoPro to capture your moments of being one with the wind!

Intense and rapid, the 20-kilometer Bulu River should be on your list if you’re looking to spice up your sightseeing. Aside from rocks of different sizes, kayak rides on this river are also filled with exciting twists and turns. The only caveat is you have to rent your own kayak before going since there are no tours available in the area. On the other hand, the Agua-Grande River makes a relaxing sight from the small waterfall that flows into a river before falling into the sea. To swim in the pool, waterfall, and stream is economic, setting one back by only ₱20. What’s more to love? Agua-Grande River is good for the environment, acting as a hydroelectric powerplant that provides electricity for 17,000 houses in Pagudpud. Of course, it’s worth the trip even just for their rightly famous halo-halo, but you can also visit Paraiso ni Anton nearby. It’s a gorgeous waterfall frequented by devotees for its rumored healing powers. A flight of stairs leads visitors to a grotto of the Virgin Mary and Jesus, shrines that are already awe-inspiring on their own. If you’ve seen Bantay Abot Cave, you’ve seen a genuine masterpiece of nature. True to its name in Ilocano, Bantay Abot is essentially a “mountain with a hole.” Light passes through the carved opening like a ray of hope, making a soulful excursion for tourists and locals alike. The top of the hill is also worth the climb for its lush greenery. And with its beachfront location, Bantay Abot is definitely one for the feed! Likened to a giant sea turtle, a smaller rock formation called Timmangtang Rock is also covered with rich green vegetation. Locals consider it the male counterpart of the female Bantay Abot Cave, together making up the “Lovers’ Rocks.” Standing on either one, you can marvel at the sight of its significantly stunning other. If time permits, you can also take the half-hour drive to the neighboring town of Bangui to see the first wind farm in the Philippines.

Because Ilocos Norte lies between the Pacific Ocean and West Philippine Sea, it’s windier than other Philippine provinces. So, the government built larger-than-life and power-generating windmills. Bangui Wind Farm not only provides electricity to 40% of Ilocos Norte; it’s also open to the public for free. You can just go and take in the sight of the gigantic wind turbines with the fresh smell of the ocean. Don’t forget to take pictures for the ‘gram—they’re going to have some major beach vibes that will be impossible not to Like.

How to Get to Pagudpud

The fastest way to reach Ilocos Norte is by plane—both Cebu Pacific and Philippine Airlines offer flights to Laoag, the nearest airport to Pagudpud. From Laoag International Airport, you can ride a bus and reach Pagudpud in two hours.

Pagudpud is also accessible from the bus terminals in Cubao. Starting at around ₱750, Florida Transport can take you from Metro Manila to Pagudpud in approximately 10 hours. 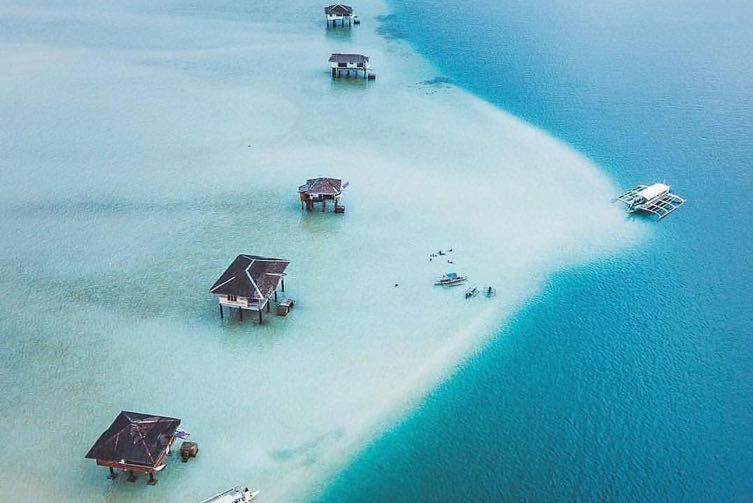 Features This Tropical Paradise in Camarines Norte is Worth the Trip Features The Chill Life: Enjoy a Laid-Back Vacay at These Zambales Beaches