Beyond Lechòn: 10 Delicacies You Can Only Find in Cebu

One of the best ways to learn about a place? Its food, of course.

A lot has been said about Cebu's world-famous offerings, but there's more to it than just lechòn. Here are just some of the many dishes that are worth checking out on your trip to the Queen City of the South! 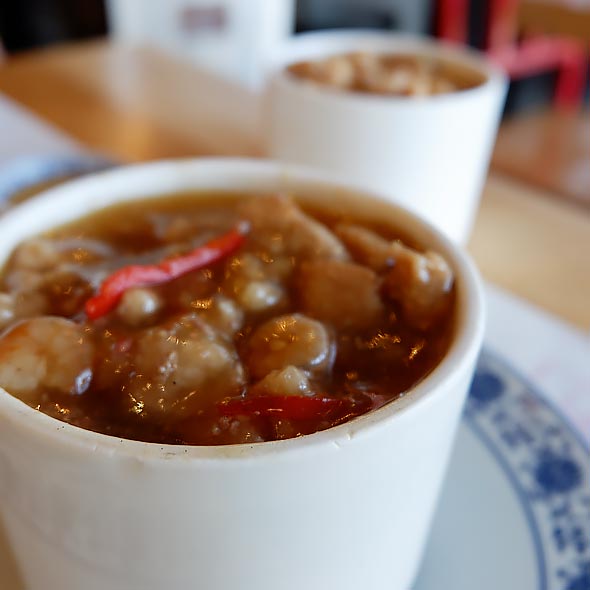 This dish—as locals know it anyway—has evolved from a traditional Chinese dim sum staple into a uniquely Cebuano specialty. A steaming hot bowl of fried rice is topped with pork, shrimp, and peas mixed together in secret sauce that has never been replicated anywhere else. Try it spicy for a hearty kick.

There are plenty of Dimsum Break branches in the city, but we recommend the Robinsons Galleria Cebu. This is where the purveyors of the original Steamed Fried Rice have finally found a new home after a 20-year hiatus. 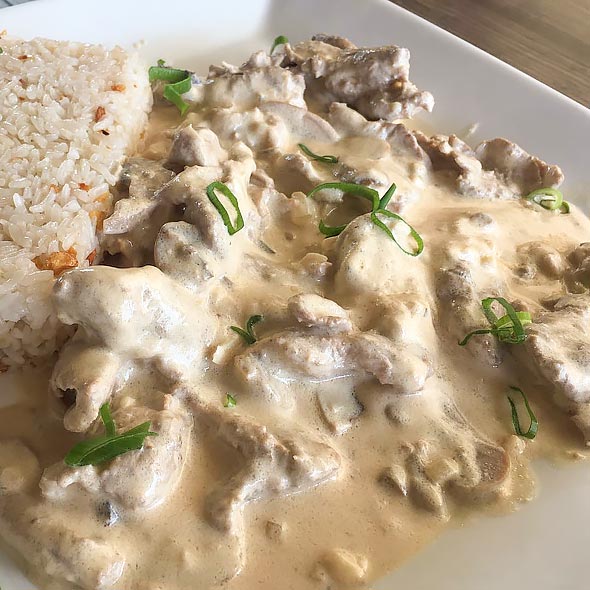 Even if stroganoff isn’t necessarily a Cebuano dish, this version certainly is for locals. Crafted by culinary visionary Jan Rodriguez, the Stroganov is comfort food at its best—with strips of pork tenderloin (there’s an Angus beef version too!) and a hefty helping of mushrooms mixed with a rich, sour cream-based sauce. It’s served with a side of garlic rice, which surprisingly, enhances the dish’s flavors. 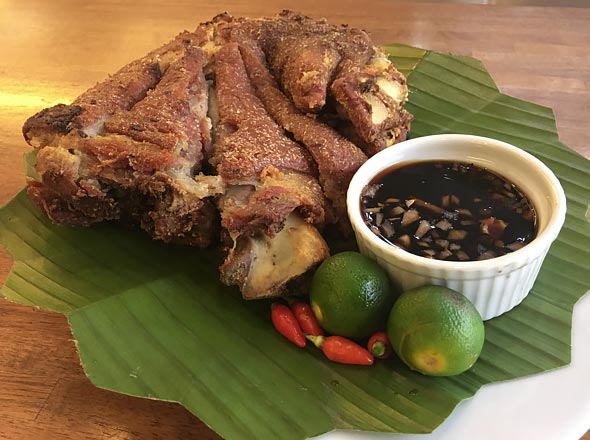 When it comes to crispy pata, all roads in Cebu lead to Alejandro’s. Everyone knows it as the Home of the Best Crispy Pata in Town, an accolade made legitimate by SunStar Best of Cebu in 2014-2015, and 2017—as if the dish itself didn’t prove that on its own!

Alejandro’s crispy pata is a generous pork leg deep-fried into golden crackling crispness. As for the meat inside? Tender, fall-off-the-bone perfection. It makes for good pulutan, but you’d be hard-pressed not to order rice to go with it.

TIP: Head there on a Wednesday night to join Cebu Trivia Night—there's no better fuel for a challenging game than crispy pata! 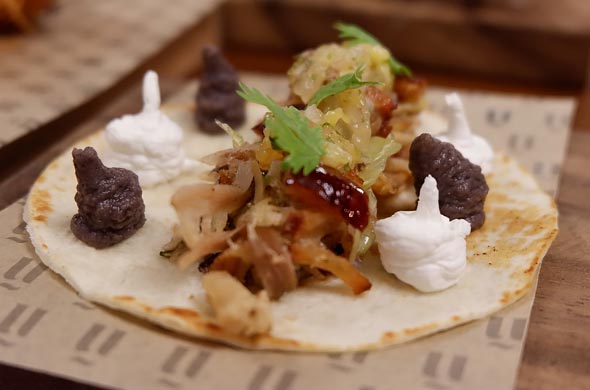 Alright so this is lechòn, but it’s not like you can find a taco version of it anywhere else! When award-winning chef Chele Gonzalez decided to open a restaurant in Cebu, it took very little convincing to encourage him to use Cebu’s world-famous lechòn. Together with mango salsa, jalapeño frijoles mousse, and sour cream, this is an unexpected take on lechòn that works perfectly. 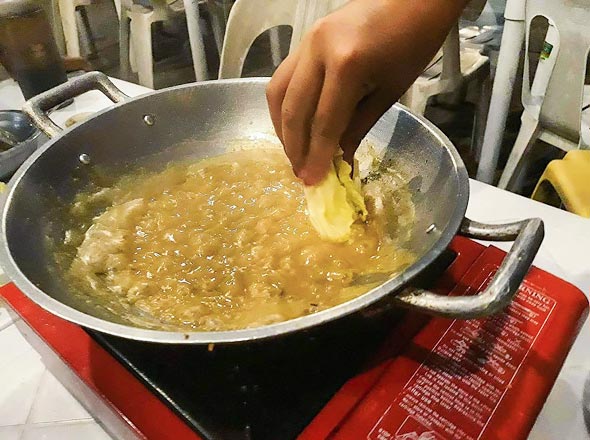 Tuslob-buwa translates to “dipping [into] bubbles,”. Dip what, you may ask? This uniquely Cebuano street food experience entails dipping pusô (more on that later in this list!) in a sizzling mixture of liver, shrimp, onions, garlic, and pig’s brain. Trust us, it’s not as icky as it sounds.

A must-visit establishment is Azul Cebu. Located in an open area along Gorordo Avenue, it retains the street food charm that defines tuslob-buwa, while ensuring ingredients are prepared in a sanitary manner. Azul even takes things to the next level, providing diners the ingredients and giving them the freedom to concoct and customize the own dipping sauce to their liking. Who could resist that? 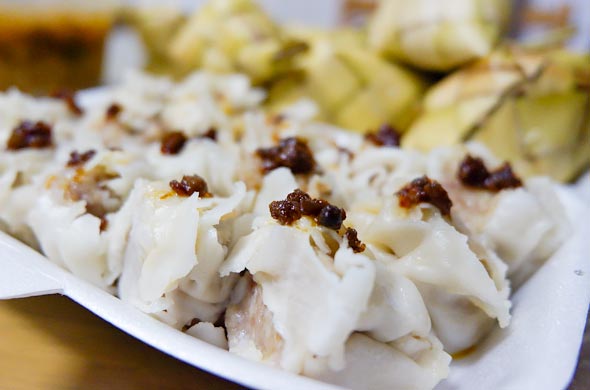 Another dish that evolved from a traditional Chinese staple to something that’s very local, Siomai sa Tisa is something you can’t find anywhere else. Tisa is a district within Barangay Labangon, which has since become the Siomai Capital of Cebu. While this siomai is no-frills with its simple mixture of ground pork and salt, what truly makes it unique is the special chili sauce that’s so addicting. Squeeze calamansi all over, pour some soy sauce, and you have a winning ulam—at five pesos each! 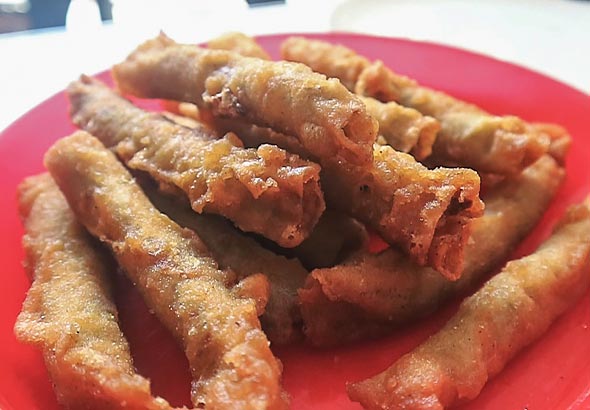 If people on a budget aren’t wolfing down Siomai sa Tisa, you can bet anything they’re eating ngohiong instead. At around nine pesos a piece, ngohiong—literally the “five-spice powder” (star anise, cloves, Chinese cinnamon, Sichuan pepper and fennel seeds) that gives ngohiong its distinct flavor—is a popular cheap meal, also best paired with pusô. This is Cebu’s version of the Chinese spring roll, which is commonly stuffed with vegetables and dipped in a spicy-sweet sauce.

Despite its unassuming location, Doming's Ngohiong is one of Cebu's most popular ngohiong hunts. Plenty of locals flock here, lest the risk of them running out of stock by the time you get there. 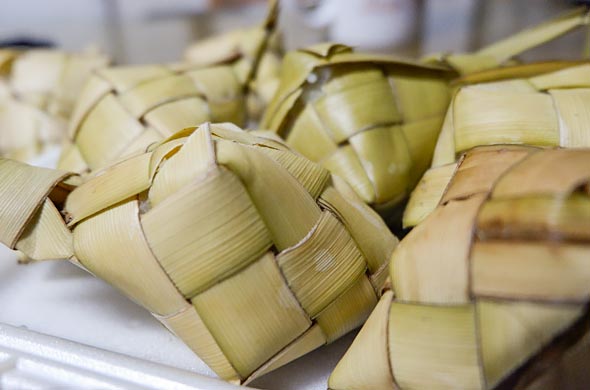 Much has been said about street food in this list alone, but what truly brings the experience together is pusô. Just as how rice accompanies every Filipino meal, pusô is a must when having street food in Cebu. Here, rice is placed in a diamond-shaped casing made of woven coconut leaves, which is then boiled until cooked. Equal parts flavorful and handy, it is also a popular and convenient staple for beach outings.

Pusô can be found in almost every food stall that serves lechòn, lechòn manok, and barbecue, as well as ngohiong, Siomai sa Tisa, and tuslob-buwa. For the ultimate Cebuano street food experience though, go to Larsian sa Fuente. 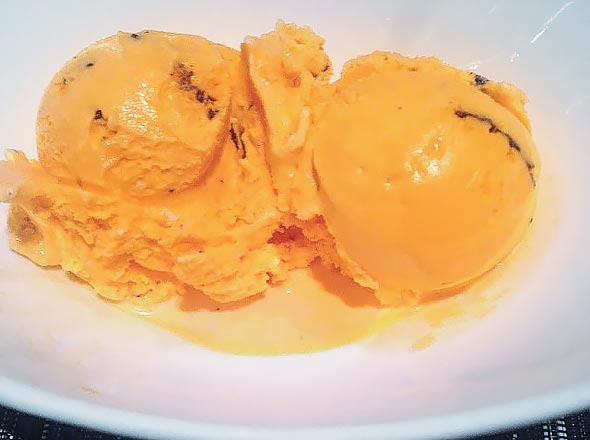 There's a lot to be said about the buffet in Feria Restaurant, Radisson Blu Cebu. In other words, there are plenty of reasons to dine there on your next visit to Cebu. But if there's one thing you need to keep an eye out for dessert, it should be the orange chocolate chip ice cream.

While Radisson Blu produces homemade ice cream in a variety of signature flavors, the orange chocolate chip variant is rather elusive. In fact, it only comes out on occasion without a fixed schedule. If it makes an appearance on your visit there, consider it your lucky day! With the unexpected combination of oranges adding a zesty contrast to the sweetness of the chocolate chips, this one is definitely a dessert to remember. 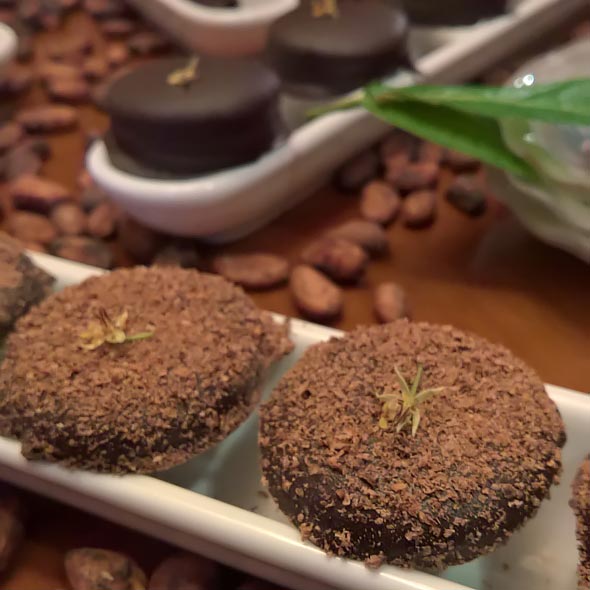 With the vision to elevate local chocolate into something the Philippines can be proud to offer, Ralfe Gourmet has brought the concept of gourmet cacao into the dessert radar today.

Raquel Toquero-Choa, or known as the Chocolate Queen, learned to harvest cacao and prepare tabléa (cocoa beans shaped into flat discs, then melted into a traditional chocolate drink) from her grandmother at age 7. These were skills that became pivotal when she started her business. With an entire cacao plantation, Ralfe Gourmet supplies cacao and other locally-produced chocolate byproducts to major hotels in the country. And most recently, to Guam.

Stop by The Chocolate Chamber, Ralfe Gourmet's retail arm in the form of a rustic chic cafe. If you have time, go the whole nine yards and take the chocolate tour. For obvious reasons, we highly recommend the latter. Be enlightened as you learn more about Ralfe Gourmet's chocolate journey—all while eating chocolate, of course!

Still itching for more adventure? Get some inspiration from our Travel Guide for a list of things to See, Eat, and Do in Cebu! Check out our other exclusive partner resorts in Cebu.

About Patty
Patty Taboada is a Cebu-based lifestyle editor-turned-businesswoman who recently left the media industry to begin her own social media relations firm. A writer at heart, she juggles between maintaining a blog and contributing to local publications in her spare time—that is, if she’s not buried in a book, involved in a theatre production, or just doting on her dog.