Eco-conscious, environment-friendly, sustainable—more than just buzzwords, these terms have become a way of life. 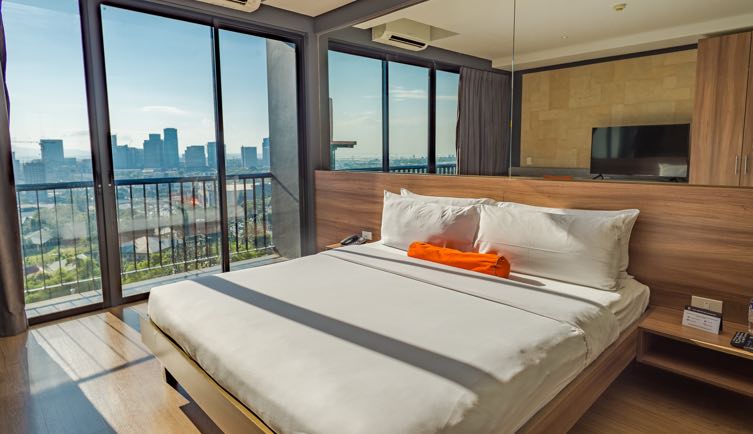 But as more brands advertise themselves as having the environment at the forefront, only a few truly make the cut—the ones that have had sustainability and the Earth in mind from the very beginning, not just as an afterthought. Azumi Boutique Hotel in Madrigal Business Park, Alabang, Muntinlupa is one of those rare establishments that measure up.

Committed to making a difference, Azumi sets itself apart from the number of accommodations already up and running in the area with design that’s both beautiful and mindful, allowing the unique hotel to be top of mind for its chosen market: the discerning millennial. 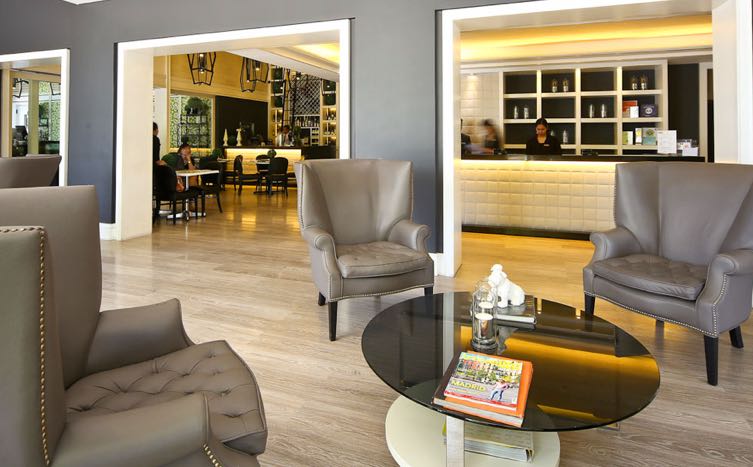 Take for instance the lobby designed by Ivy and Cynthia Almario. It does away with the stiff and grandiose overtures you’ll see in most hotel lobbies, and instead refocuses on touches that make Azumi feel like a cozy home, from comfy couches to frame-filled shelves. But it’s also a home that invites you to experience the world, which this travel-minded generation fully understands. A number of vignettes, influenced by bucket-list destinations like New York City and London, pepper the lobby’s interiors. The very building blocks that make up Azumi prove that they’re not just riding on the eco-friendly bandwagon. There was an intentional effort to make the entire space greener. The ceramic tiles that line a part of the lobby and all the rooms are actually Ecocarat tiles, natural ceramic tiles that are “breathable,” made from a volcanic mineral called Allophane that contains micro-pores. Ecocarat tiles naturally control room humidity, helping minimize electricity wastage, and they absorb harmful substances and unpleasant odors, creating a healthier atmosphere. To complement the green tiles, Azumi uses a healthy ceiling by Daiken, which can make any room naturally cool, a major plus in scorching Manila. This healthy ceiling doesn’t only deodorize and absorb sound, it also controls humidity by absorbing moisture when it’s too humid and releasing it when it’s too dry. In this hotel, you’ll also find only electricity-saving LED lights. Plus, as a practice, Azumi lessens consumption by opening windows in hallways for natural ventilation, as not to rely only on air-conditioning to keep floors cool.

Max Out Your Staycation Once you’ve checked into Azumi, trust us, it will be difficult to leave. But should you decide to, Molito is a walk away, where you can find original South spots like Ramen Yushoken, Exchange Alley Coffee House, Designer Blooms Café, and Ice Flower. If you’re completely staying in, you can’t miss taking a dip in the outdoor saltwater infinity lap pool, having traditional Filipino fare at Romulo Café, or relaxing with a luxurious mani-pedi at Nail Spa. When it comes to selecting your room, the Corner Garden Room for two, with its queen bed and day bed, is ace. In addition to the amenities you’ll find in the rest of the rooms, this particular one comes with its own spacious balcony that spans three corners of the room. Another excellent option is the Garden Room for two that also comes with its own balcony. If you’re thinking of booking a staycation with your family or barkada, the Double Queen Room that sleeps four is exactly the kind of space you’re looking for. The much-talked-about interiors make Azumi a prime spot for prenuptial shoots. For your convenience, a curated package is available for brides- and grooms-to-be interested in using the hotel as a shoot location. Another development making its way to you in September? A fresh look for Azumi’s penthouse, now decked with a new lounge area called the Pool Bar. This one’s already running on soft opening, and when it fully launches, you’ll get to enjoy the lounge-meets-snack bar with its affordable food items, prices of which will be similar to what you’ll find in a convenience store. Talk about easy on the budget!

This article was last edited on August 29, 2019 by the DG Traveler team.

About Larissa
Larissa is a writer who lives in pursuit of what is true, noble, right, pure, lovely, and admirable. She loves lush mountains and black coffee.