A Brief and Colorful History of Festivals in the Philippines

If there’s one good reason to go around the country, it’s to experience all the festivals. There are breathtaking highlands and awe-inspiring tropical getaways—so much, in fact, that it can be near-overwhelming to have to choose your next destination escapade. And yet, beyond all these picture-perfect sights, the charm of the Philippines lies in a culture deeply seated in religion and history, which remain relevant up to the present with the celebration of festivals. When: Every third Sunday of January

The grandest festival of the country is easily Cebu’s Sinulog Festival, which honors the Señor Santo Niño or the Child Jesus, an image of which was a gift from the Portuguese explorer Ferdinand Magellan to Raja Humabon and Hara Amihan when he came to conquer the Philippines in 1521. ‘Sinulog’ is derived from the Cebuano adverb ‘sulog’, which roughly translates to “like water current movement”—the inspiration for the festival’s famous two steps forward, one step backward dance.

While recent years have made Sinulog more notorious for its street parties, there are still millions of devotees who make the pilgrimage to the Basilica Minore del Santo Niño, the oldest Roman Catholic church in the country, built on the spot where the statuette of the Child Jesus was found by Miguel Lopez de Legazpi in 1565. When: Every third Sunday of January

Known as The Mother of All Philippine Festivals, the Ati-Atihan serves as the inspiration behind Cebu’s Sinulog and IloIlo’s Dinagyang, among many other festivals in the country. While it is also in honor of the Santo Niño, its origins are more pagan in nature, dating some 800 years ago. The festival’s name means ‘to be like the Atis’—the Aetas, the dark-skinned indigenous people who are said to be the first settlers in the Philippines. Initially a celebration of unity between the Aetas and Malay chieftains who fled Borneo to settle in the Panay Islands, the Spanish conquerors later on integrated Catholicism into the festival.

At present, people who attend Ati-Atihan will encounter street dancers donning vibrant colorful costumes, contrasting with blackened faces. The festival is also famed for snake dancing, in which people hold on to each other to weave through the crowd in a snake-like fashion. When: Every fourth Sunday of January

The Dinagyang Festival, the name of which comes from the Ilonggo term ‘dagyang’ meaning ‘merrymaking’, is heavily influenced by Sinulog and Ati-Atihan, and borrows elements from the two festivals. A little more modern than its inspirations, Dinagyang began in the 1960s, when a replica of the Señor Santo Niño was first brought in from Cebu, much to the devotion of the Ilonggos. The anniversary of this day became a yearly celebration, which eventually incorporated dramatized interpretations of the Aetas’ welcome of the chieftains from Borneo.

Today, Dinagyang Festival has become popular in its own right as a religious and cultural celebration with three main events: A fluvial procession that takes the Child Jesus from the Iloilo River to the San Jose Parish Church, a Kasadyahan Festival noted for its street dancing contest, and the Ati-Atihan competition, where dancers with blackened faces also perform traditional, interpretative dances. Every February, the Summer Capital of the Philippines celebrates its annual flower festival, called the Panagbenga Festival. From a Kankanaey term that means ‘season of blooming’ or ‘time for flowering’, Panagbenga is a tribute to Baguio City’s vibrant and diverse flora. The festival’s origins go back to the 1990s, as a hopeful celebration of Baguio’s rise and recovery following a devastating 7.7-magnitude earthquake that caused extensive damage to the city. Panagbenga is known for its flower-decorated floats and street dancing, with participants wearing flower-themed costumes. It is also famous for all its bazaars and trade fairs, allowing the people of Baguio City to showcase their world-class talent. 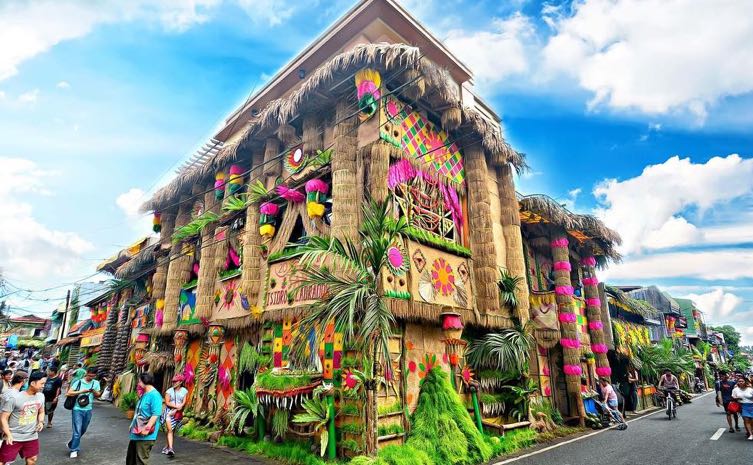 In honor of St. Isidore the Laborer, patron saint of farmers in the Philippines, the people of Lucban, Quezon celebrate the Pahiyas Festival in the middle of the summer. It began as a simple celebration of thanksgiving back in the 15th century, when farmers offered their harvests at the foot Mount Banahaw—a practice that carried on after the first Church was established and saw natives offering their fresh farm produce to St. Isidore. Eventually, with the Church unable to accommodate all the harvest, they were instead displayed at the homes of the farmers.

Today, the Pahiyas continues this tradition, with participants going beyond showcasing their harvests to also put up hats, bags, fans, longganisa, and of course, kiping—colorful, leaf-shaped wafers made of rice dough. When: Third week of August

With a name derived from the Dabawenyo friendly greeting, “Madayaw!” Davao City’s Kadayawan Festival is befittingly a celebration of life. Like Pahiyas, it also started off as a thanksgiving ritual for bountiful harvest by the ethnic tribes residing at the foot of Mount Apo. In the 1980s, it evolved into a government-initiated program to unite Davaoeños after Martial Law, gradually becoming a full-fledged festival to celebrate life, heritage, and blessings.

Lively Kadayawan is full of activities, from the street performances at the Indak Indak sa Kadayawan to the float parade of Pamulak sa Kadayawan, and all the trade fairs in between—Kadayawan is the time to indulge in the king of all fruits, Durian. When: Fourth Sunday of October

Known as the City of Smiles, Bacolod demonstrates its resilience with its annual MassKara Festival. The festival started out in a time of crisis in 1980 when the people of Bacolod, who relied on their sugar cane plantations, suffered from a devastating drop in production and all-time low prices with the introduction of high fructose corn syrup as a sugar substitute. That same year, more than 700 Negrenses lost their lives with the sinking of the MV Don Juan. Following those tragic events, the local government decided to establish the MassKara Festival as a way to boost morale and liven up the people’s spirits.

MassKara, a portmanteau derived from ‘mass’ (a multitude of people) and ‘cara’ (a Spanish word for face), is also a play on the Filipino word maskara, which translates in English to mask—a defining feature of the festival. These masks, akin to Mardi Gras fashion and worn by street dancers, are always painted with smiling faces to reflect Bacolod’s sobriquet.

Planning your next trip? Get inspiration from our comprehensive Travel Guides!

About Patty
Patty Taboada is a Cebu-based lifestyle editor-turned-businesswoman who recently left the media industry to begin her own social media relations firm. A writer at heart, she juggles between maintaining a blog and contributing to local publications in her spare time—that is, if she’s not buried in a book, involved in a theatre production, or just doting on her dog.