A Beginner's Guide to Chicken Inasal

Whether it’s your first or tenth time to visit Bacolod, getting your fill of authentic chicken inasal is usually one of the most-anticipated things on the agenda. 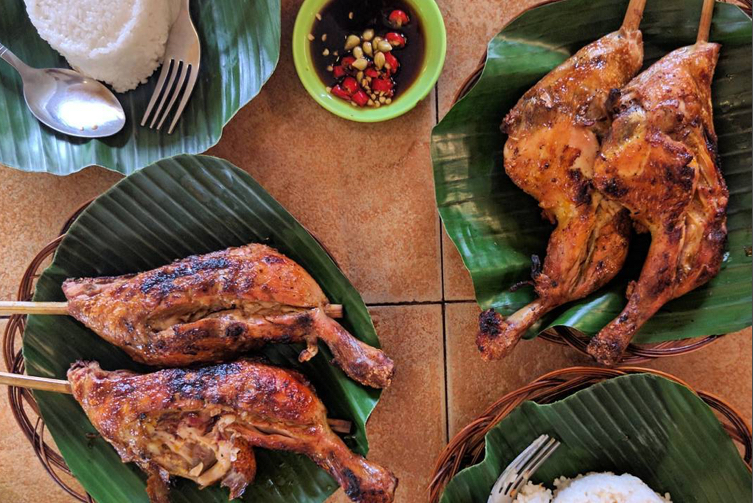 This dish exemplifies a lot of what there is to love about Negrense cuisine—simple, no-frills, caters to all tastes. What makes chicken inasal (plainly known as "inasal" among locals) different from other kinds of roast chicken is its special marinade mixture. The typical recipe is made up of calamansi, pepper, coconut vinegar, and annatto, but it can also include other secret ingredients.

The inasal restaurants that are around today cropped up in the 1970s, the prime examples being those in the Manokan Country complex, which continues to serve Bacolodnons and visitors. Older generations trace the origins of inasal to Cuadra Street, which was near the public plaza and was nicknamed "Chicken Alley" for the small food stalls lining it. The dish's popularity led to the opening of Manokan Country in Bacolod’s reclamation area. One of the most frequented spots in the unassuming food complex is Aida's Manokan, a family-run establishment that has been in business since 1975. Meanwhile, to set it apart from the jam-packed Manokan Country, Chicken House opened its first standalone branch on San Sebastian Street. Today, chicken inasal has become an ubiquitous Filipino dish. While many restaurant chains try to recreate and mass market it, nothing beats the original—just ask your closest Negrosanon friend. Even among locals, inasal remains a favorite: steady, reliable, filling, comforting.

The process of eating inasal requires its own unique style. You can eat it like you would any regular roast chicken dish, but if you’re here for an experience and not just a meal, here's everything you need to know about how to enjoy this popular delicacy. “Sawsawan” is Hiligaynon for dipping sauce. Chicken inasal alone is already quite tasty, but dipping it in a bit of sauce makes it even more delicious. A proper inasal restaurant will equip each of its tables with a medley of patis (soy sauce), sinamak (vinegar), katumbal (chili peppers), and calamansi. In a saucer, you can mix these together according to your taste. For your main dish, you can choose the parts of the chicken you like best. Typically, one would order pecho (breast), paa (leg), or pakpak (wing).

The starters and side dishes Inasal is the star of your meal, but if you're feeling adventurous, you can try other parts of the chicken, which are cooked in the same special marinade. The baticolon (gizzard), atay (intestines), or isol (butt) make for great appetizers or side dishes with their smaller servings and varying textures. Depending on the season, fresh, juicy talaba (oysters) are great starters while you wait for your inasal to be served. If you notice a bottle of bright orange liquid on the table, that’s chicken oil, and your meal won’t be complete without a hearty drizzle of it all over your rice. Don’t be afraid to be generous with it!

The utensils (or lack thereof) Lastly, go ahead and eat with your hands. You won't be judged for using a spoon and a fork, but there's really nothing quite like digging into all of that goodness with your bare fingers. Anyone up for seconds?

Tempted to try more Bacolodnon dishes and delicacies? Satisfy your hunger and curiosity with More Than Inasal: 10 Other Must-Try Delicacies in Bacolod. Find more travel inspiration for the City of Smiles when you check out our travel guide.

About Anna
Anna L. Golez is a Bacolod-based writer who only likes to leave the house if there's good food, great company, extraordinary views, and interesting stories.