8 Things You Probably Didn’t Know (But Should!) About the Banaue Rice Terraces

For 2,000 years, the Banaue Rice Terraces have been the priceless contribution of our Philippine ancestors to humanity. Dubbed as “the 8th Wonder of the World”, it represents an enduring illustration of an ancient civilization which displays Filipino skills, surpassed various challenges, and witnessed Philippine history unfold. In recent decades, there’s been a sparked and steady curiosity towards the Banaue Rice Terraces as people flock to the place not only to see its beauty but also to have a firsthand experience of this man-made architectural wonder. That curiosity was fuelled even more when the terraces had a cameo in the film Avengers: Infinity War!

Read on for more facts about the Banaue Rice Terraces, as well as things you can experience when you visit this awe-inspiring masterpiece: Legend has it that the word “Banaue” is derived from the word “banawor”, a swift flying bird at night that lived in one of the oldest sites of the town. In time, the whole town came to be referred to as Banaue. When the Spaniards occupied the town, they mispronounced banawor as Banaue, and the error stuck. 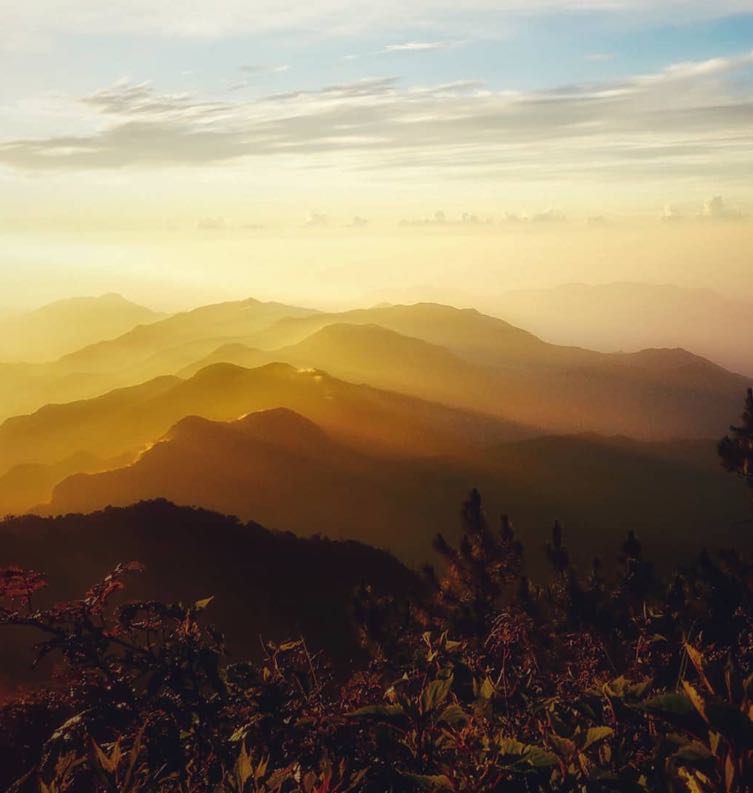 Mt. Amuyao is the highest peak in the area. The terraces are located in the province of Ifugao, which is also the name and language of the people living in the area. It is bound on the north by Mountain Province, on the south by the municipality of Hingyon, and on the east by the municipality of Hungduan. It is 25 kilometers west of Lagawe, the capital town of Ifugao. For a scenic destination that has been around for 2,000 years, it’s not surprising that several key events in Philippine history occurred in Banaue. During the Spanish Regime, the Spaniards tried to establish garrison at Ducligan, which became the seat of the Spanish Government, but this did not last long because of the hostility of the people, for which reason they left the garrison and went to Mayoyao.

In 1901, the American Government was established in Banaue headed by Capt. Jeff Gelman of the American Army who was appointed as its lieutenant governor. Captain Gelman was succeeded by Col. William Dosser who served as the last American governor of Ifugao. His deputy provincial governor and Philippine Constabulary provincial commander was Capt. Bulan of Solana, Cagayan. Of these 18 barangays, Bocos has the highest population while Banao is the least populated.

5. It is included in the UNESCO list of World Heritage Sites. Contrary to popular notion, the Banaue Rice Terraces as seen from the viewpoint are not included in the UNESCO inscription, due to the presence of numerous modern structures. However, it is a National Cultural Treasure under the Ifugao Rice Terraces. In 1995, UNESCO listed both the Batad and Bangaan Rice Terraces as World Heritage Sites. It shares the distinction along with the Taj Mahal in Agra, India, Acropolis in Greece, and the City of Cuzco in Peru.

6. They have a festival in celebration of the local rice wine. Celebrated every 3 years since 1979 in Banaue, Ifugao, the Imbayah Festival was based on an old ritual marking the ascendancy of a commoner and his family to the ranks of Kadangyans or the Banaue elite. The word imbayah itself comes from the Ifugao word bayah, or rice wine, which signifies nobility and high stature in the community.

During the festival, rice wine from antique Chinese jars overflows, and a banquet is arranged for the mortals and the gods. The Ifugao elderly say that this celebration has been their way of thanksgiving and is a season of merry-making after a bountiful harvest.

7. It is home to the Tappiyah Falls. Tappiyah (or splash) Falls is a 70-meter tall waterfalls located in the mountains of Banaue. It's a sight to behold as well!

8. It is actually composed of six rice terraces. And if each rice terrace was connected end to end, the combined distance would reach halfway across the globe!

Planning a visit? Here are the essentials you need to know:

Although some trips to Banaue can be arranged via travel groups or agencies (which is more convenient), most travelers head to Banaue via bus with travel time usually taking around 8-9 hours via North Luzon Expressway. At present, only two bus companies have direct trips to Banaue namely Ohayami Bus Company and GV Florida Bus which both have terminals located in Sampaloc, Manila.
However, as of June of 2017, traveling to Banaue is possible in 5 hours with the introduction of chartered flights via Clark International Airport in Pampanga to Bagabag Airport in Nueva Vizcaya.

Additional Bus Schedules during Fridays and Peak Seasons are as follows:
9:00 PM - Manila to Banaue
6:45 PM - Banaue to Manila
Regular fare during off-season is around ₱450 (US $8.25) and varies on peak season. More details can be found on the company’s website.

Regular Bus Schedules for GV Florida Bus are as follows:
10:45 PM - Manila to Banaue
8:30 PM - Banaue to Manila
*Alternately, you can also ride the GV Florida Bus bound for Bontoc Mountain Province which Manila leaves at 8:35 PM as it passes Banaue, Ifugao. Bookings, trip schedules and other details can be found on the company’s website.

Alternate Route
On peak seasons, (March-June and November-January), you can reach Banaue via Victory Liner buses bound to Tuguegarao in Cagayan. Tell the driver to drop you at Solano, Nueva Vizcaya. From there you will need to ride a jeep from Lagawe, Ifugao and another jeep to reach Banaue proper.

Where to Stay in Banaue There are a number of home stays (with prices starting at ₱150 per night) available around Banaue, but if you are looking to experience how the locals live, you may want to stay at guesthouses located in Batad. The rooms are not well-equipped but if you just want to chill and enjoy the amazing view of the terraces, this is the best bet for you. Details on location/rates can be found on their Facebook pages as well as the local tourism office at the city proper.

Most accommodations in Banaue have restaurants where guests can dine, and in some cases, enjoy the view while eating. Food in Banaue is a good mix of the traditional, local, and international which uses mostly local produce and caters to travelers at different price points. Since it opened in 1978, Sanafe Lodge and Restaurant has become the place of choice for most travelers in Banaue because of its location as well as the service of its staff. Named after Susan (the owner), Ana (her mother), and Fe (her sister), Sanafe is located only a few steps from the bus and jeepney terminal and is next to the market in downtown Banaue.

Sanafe Lodge and Restaurant serves local dishes and comfort food as well as pasta and vegetables for the healthy eaters. It also has its own mini bar where guests can have a sampling of their selection of international wines and spirits.

A single room at Sanafe will cost you ₱800. This freestanding restaurant located just across the street from People’s Lodge has been in operation since 1982. It is not hard to locate Las Vegas Restaurant as it is the very first hotel you will see once you arrive from Manila. It also has two locations at the town proper and its appearance brings to mind European hostels. Interesting fact: the Las Vegas Restaurant and Lodge has been a favorite vacation retreat for the US Peace Corps.

This lodge has nine rooms and has a dining area where guests can cook their own meals. Las Vegas Restaurant and Lodge also serves beef, chicken, pork, as well as breakfast where you can sample the famous Ifugao rice coffee.

Las Vegas Restaurant and Lodge
Downtown Banaue
(0998) 608 2799
leonajoy.bustamante@yahoo.com
Bookings and inquiries can be made here and here. Located 150 meters from the bus stop, Banaue Homestay is on the high road between Banaue proper and Bontoc, which gives guests a better view of the rice terraces.

A family-run hostel, rates at Banaue Homestay start at ₱600, while the restaurant offers a sampling of healthy salads with ingredients sourced locally. A must-try is their chicken afritada, considered a house specialty. Formerly known as People’s Inn, it is located 15 meters from the Tourist Information Office, and is one of the first hotels you will find when you enter downtown Banaue area.

A bunk bed at a common room will cost you ₱150 per night while a family room costs ₱1,500. Their restaurant offers a picturesque view of the rice terraces and serves Filipino comfort food and international dishes. It also has a souvenir shop which sells handicrafts ranging from wood carvings to textiles made by local artisans. 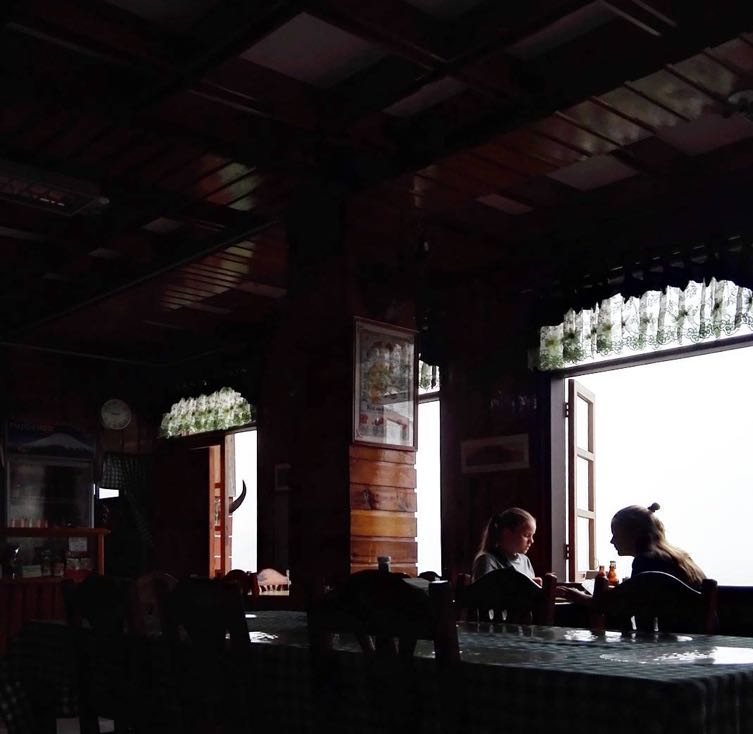 A few steps away from the town center is this lodge which has been in operation for the past 30 years. Uyami’s Green View Lodge and Restaurant has 22 common rooms and 14 rooms with private bathrooms, all of which have hot and cold showers. Rates start at ₱900 for a room that can accommodate up to two people. If you’re looking forward to getting some perspective on how locals live in Banaue, a stay at Ramon’s Native Homestay and Restaurant in Batad will give you just that.

Owned by Mr. Ramon Binalit, a proud Ifugao, the lodging place provides a feeling of being in a living museum where guests can have a taste of local living and experience activities such as harvesting rice, which is still done the traditional way. The location has five bale (ifugao house) which are more than centuries old, and were constructed using local materials and age-old techniques. Interestingly, no nails were used in the construction of these houses.

Mr. Binalit also offers a charming bonfire for his guests—a chance for them to converse with one another, enjoy local drinks, or watch fireflies on a good night.