6 Beautiful International Spots You Can Find in Cebu

A popular vacation destination in its own right, Cebu gives a whole new meaning to world-class.

In fact, it's where you can get a glimpse of the world’s beautiful destinations sans the costly flights and visa applications. All you need is a ticket to Cebu and you’re all set!

Here are 6 beautiful spots in Cebu that will instantly transport you to another country: The introduction of the celosia flower as the Santo Niño flower in Cebu couldn’t have been more timely for Sirao Garden owner Elena Sy-Chua. She first had the red and yellow flowers planted on her family’s hillside land. After it became viral as a photo-worthy destination, Elena and her husband Alfred decided to open the place to the public. Visiting Netherlands’ capital became the ultimate inspiration for her garden—that's why it's called Little Amsterdam! If you love flowers, then Cebu’s Little Amsterdam is a sight you shouldn’t miss. While the celosias are still the main attraction, the expansive garden is teeming with fields of colorful blooms like gerberas, sunflowers, dahlias, yellow bells, lilies, and petunias.

Sirao Flower Garden certainly deserves more than just one spot on your Instagram feed. Some of the most photogenic spots we could find include the replica of an Amsterdam Windmill, signs made out of flowers, the fountain, gazebo, and the bridge. 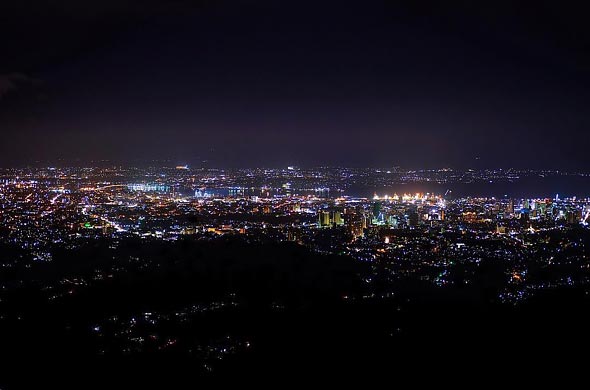 Resting atop one of the city’s mountain peaks is The Tops. While its stone walls and fortress-like aesthetic may not be the first thing you’d want to see upon visiting, this lookout point can be highly comparable to Antonio Gaudí’s mosaic masterpiece, Park Güell. 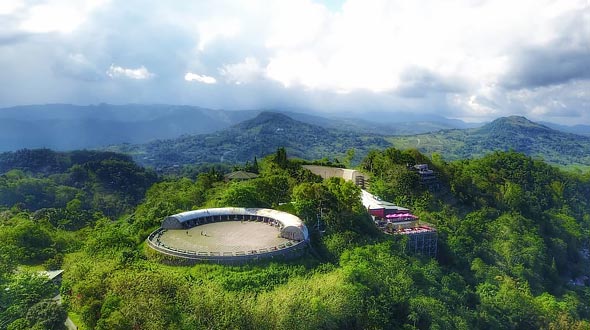 Though not as quirky and colorful as the Spanish landmark, The Tops exudes a historic vibe that some can even describe as eerie. Its resting spot is hauntingly beautiful and uncannily similar to Park Güell’s tunnel-like Laundry Room Portico with its slanting columns. Apart from its unique architecture, this viewing sits 600 meters above Cebu City. It's where you can enjoy unrivaled city views of churches, bell towers, universities, hotels, homes, resorts, and beaches to name a few!

The sprawling views of the city merge the old and new, the intersection of nature and man-made structures, and the connection of earth, water, and sky. To top it off (pun intended), casual dining and drinking spots are there to prove that it’s never lonely at The Tops! To have a shrine made just for you... If that’s not a testament to undying love, then what is? In 2012, Ellen Adarna’s grandfather Rico Adarna had a temple built as a sign of everlasting devotion for his wife Leah Adarna who died of lung cancer that year. The Romanesque structure boasts of intricate details like carefully crafted sculptures (with a 9-foot bronze statue of Leah), stylishly tiled floorings, and high pillars and ceilings. Venture through its 24 chambers where a museum, gallery, and library are home to some of Leah’s lifetime collections. Apart from a cherished family monument, the Temple of Leah is a famous landmark of Cebu for visitors to trace her roots and heritage. Before you surround yourself with the temple’s grandeur, don’t forget to take photos of the marvelous city views at the viewing deck and by the charming fountain that welcomes you to the temple grounds!

BONUS: Though European in style and design, its story of endless love is similar to India’s Taj Mahal, which Mughal Emperor Shah Jahan had built for the tomb of his favorite wife, Mumtaz Mahal. Built by Cebu’s Chinese community in 1972, the Cebu Taoist Temple stands as the center of Taoism in Cebu. While its practice follows teachings of the ancient Chinese philosopher Lao Tzu, the temple welcomes worshippers and non-worshippers alike. Walk through the Great Wall-like entrance and be welcomed by the dragons that are the temple's fierce protectors. You'll pass red, yellow, and green pagoda-style prayer rooms along the way. 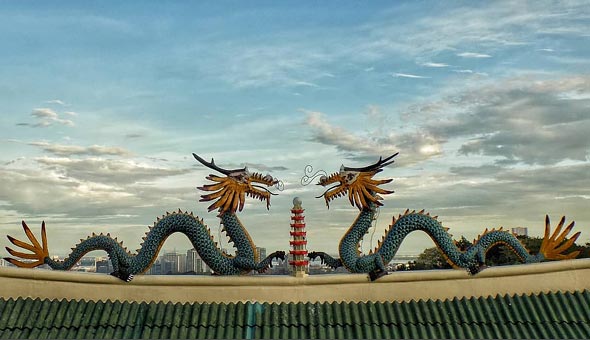 As you take in the temple’s beautiful exteriors and see the complex’s views up-close, please remember to respect the space and limit photography to the outdoors only. The prayer rooms are for reflection, not picture-taking! Whether you’re a Taoist or not, a visit to this sacred space will leave you feeling a little more calm. Avid Korean movie and Koreanovela fans are no strangers to this romantically lit rose garden. While it may be a dream destination for many K-drama fans, not a lot of people know about its Filipino counterpart in Cebu: 10,000 Roses Café.

As its name suggests, is not only home to a 2-story café, but also 2 expansive fields of 10,000 white, plastic roses. Owner Miguel Cho brought the idea of his hometown’s fairytale-like attraction to create a romantic ambiance for his Cebu café. He wanted a spot where a man can propose to the love of his life—a place where love stories can begin and end. Already picturesque in the daytime, these 3-foot tall plastic roses are a sight to behold at night! Imagine walking in between 2 blankets of lit up white roses that dance along with the nighttime breeze… How’s that for a picture-perfect moment with someone you love? Pyramids often come to mind when we think about world culture—may it be the Pyramids of Giza for history and archaeology or even The Louvre for art. Cebu has its very own addition to this list too! While the city’s counterpart of the museum may not house historical treasures and artifacts or big names such as the Mona Lisa, it does hold some of its own treasures: fine wines, tasty tapas, and innovative fusion cuisine. And of course, it goes without saying that its exterior is a one-of-a-kind work of art!

Don’t let its sophisticated look fool you—this charming bistro is not only easily accessible, but it’s also quite affordable. With its chic interiors, in-house art gallery, and morning yoga sessions, this lifestyle establishment is certainly a must-visit in your Cebu itinerary.

The Pyramid
eBloc 3 Tower, West Geonzon Street, Cebu City
Saturdays to Wednesdays, 10AM – 3AM
Thursdays to Fridays, 10AM – 4AM

Need a little inspiration for that upcoming Cebu trip? Check out our Travel Guide for a list of things to See, Eat, and Do! Enjoy discounts on Cebu stays and spa treatments here.