I’d never been to Vigan prior to this trip. Whatever perspective I had of the place was collected only through print, TV, and films, so when an opportunity to travel and visit Vigan came knocking, I obviously took it. I was fortunate to be part of a design workshop in the heritage town, and I had no idea what to expect beyond common knowledge: Sure, it’s located up north of the country, home to Calle Crisologo, Vigan longganisa, and bagnet, but I wondered what else the old city had in store. I figured there was only one way to find out.

I left Manila on a Sunday night on board Partas bus (the only bus company that has direct trips to Vigan City). I was asleep for most of the ride, and travel was a breeze as we cruised through NLEX. In no time, I reached Vigan at 8:00 AM the following day and was greeted by the staff of Vigan Tourism Council, who drove me to my accommodation.

Upon reaching the place, I met with the other participants, rested a bit, and decided to explore the place along with the group. By 9:00 AM, we found ourselves at the famous Calle Crisologo. I guess it’s safe to say that a trip to Vigan is not complete without going to this side of town. Named after Marcelino “Mena” Pecson Crisologo (the first governor of Ilocos Sur), Calle Crisologo is Vigan’s mestizo district where the affluent used to live. Here, one can walk on its adobe covered streets while marveling at the centuries-old houses which have stood the test of time.

At present, most houses in Vigan have been converted into establishments ranging from restaurants to souvenir shops selling antiques. In one of the shops at Calle Crisologo, I bought some inabel Iloco to bring home. The intricately handwoven textile is indigenous to the Ilocos region, and I'll tell you more about it in a bit. At around 10:00 AM, after exploring Calle Crisologo, we had a guided tour of a fairly new Vigan landmark, Luna Hotel. Opened on February 8, 2014, Hotel Luna boasts the distinction of being “the only museum-hotel in the Philippines”. It stands on a two-storey structure constructed in 1882 by Don Jose Florentino as a wedding gift to his daughter Doña Carmen Florentino, who married Don Honorato Romero Encarnacion in 1883. From the outside, the Luna Hotel has two floors. Given the limited space however, you’ll realize upon entering that it actually houses a series of additional floors where most of the rooms are located. For art enthusiasts, Luna Hotel has a wide collection of art made mostly by acclaimed Filipino artists. Among the pieces on display are works by National Artist for the Visual Arts Ben Cab and Juan Luna. Apart from the art pieces, they also have a selection of fine china.

After Luna Hotel, we headed back to Calle Crisologo and stopped by Irene’s and had a sampling of Vigan empanada and okoy (shrimp fritters) for a quick lunch. By 12 noon, we headed to the Vigan Metropolitan Cathedral (also known as St. Paul’s Cathedral), which is just a stone’s throw away from Calle Crisologo. Originally built as a chapel made of wood and thatch, it was converted into a church in 1641, elevating its status as a cathedral in 1758. I would say that a visit to St. Paul’s Cathedral is a must not only for Catholics but also for those into architecture, ecclesiastical art, or art in general. It is said that its 12 minor altar and brass handrails were forged in China, which explains the oriental feel to the church’s interior. Adjacent to the cathedral are a number of historic buildings as well, namely the bishop’s residence and diocesan seminary, while in front are the Plaza Burgos and Plaza Salcedo (where there's a dancing fountain show and light display every 6:00 PM).

If you’re looking for a guided tour of Vigan, you can avail of the service of tricycle drivers outside St. Paul’s Cathedral. For a fee of ₱150 per head, you get access to museums and a pottery workshop. Since the museums in Vigan close at certain hours, I would recommend that you avail of this service as the tricycle drivers know the best route to get there on time. At around 1:00 PM, we headed to our next stop: the Quirino House. Named after the Quirino family, the house went through a lot of changes before being converted into a museum in 2013 through the efforts of then Governor Chavit Singson. According to sources, Mariano Quirino was a warden of the provincial jail in Vigan, Ilocos Sur, when his wife, Gregoria Rivera, delivered Elpidio on Nov. 16, 1890, in a room at the second floor of the complex. Fifty-eight years later, the baby would become the country’s sixth president. The two-floor complex houses a museum which displays a number of memorabilia once belonging to the former President and his wife, Alicia. Among the items displayed are family photos, his collection of barong Tagalog (a collared shirt worn by Filipino usually made of jusi or pineapple fabric), shoes, and campaign memorabilia. The first floor of the compound also has an exhibit dedicated to basi (the sugarcane wine native to Ilocos) and the basi-making tradition of Ilocos Region. The display gives visitors an in-depth appreciation of this age-old tradition, and how the people of Vigan take pride in their product. Among the items on display are tools used in the production of basi: from processing the sugar cane (a wooden machinery attached to a carabao) to storage (bottles in various shapes and sizes). In another section of the compound hangs a series of paintings done by Ilocano artist Esteban Pichay Villanueva, which depicts the Basi Revolt of 1807. The said paintings used to hang at the National Museum of Fine Arts in Manila. 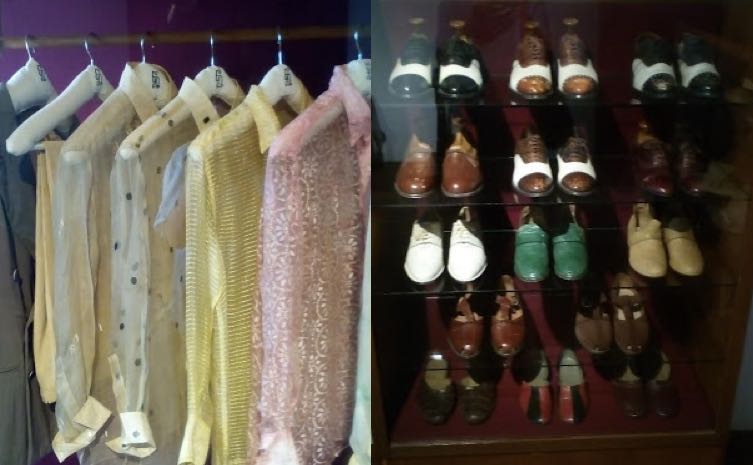 If you’re someone who’s into fashion and textile, Quirino House should be on your list when you visit Vigan. Apart from clothing once worn by former president Quirino, the house also has a display dedicated to another Ilocano product: the inabel.

Technically speaking, Inabel came from the word “abel” which refers to the process of weaving within the Ilocos region, while “inabel” refers to the handwoven cloth, hence inabel Iloco. On display are objects related to the art of inabel from fiber to looms to finished goods. Prior to this one, I never realized that there are various types of inabel Iloco apart from the ones I’m familiar with. Ideally, “pure inabel Iloco” is made of 100% cotton, but with the scarcity of local cotton plant, most of the inabel Iloco available at the market is now combined with polyester. By 2:00 PM, we went to the Padre Burgos House located next to the Quirino House. If you recall the Gomburza from Philippine History, the “Bur” stands for Padre Jose Burgos, who grew up in this spot. The two-storey house now stands as a museum which displays a number of memorabilia from an era long gone. At around 3:00 PM, our guide drove us to the Crisologo Memorabilia Museum, also located in the city center. The museum belongs to the family of the late congressman Floro S. Crisologo and displays family memorabilia such as photos, furniture, and clothing.

Visiting the Crisologo Memorabilia Museum also gives visitors a deeper understanding about the lives of one of Vigan’s most prominent political families. The display gives a clearer depiction of how the family lived, as well as their accomplishments in various fields.

One interesting display at the first floor of the house is a 1950’s Chevrolet Styleline where Carmeling Crisologo survived an ambush on May 10, 1961 in Bacsil, San Juan, Ilocos Sur. 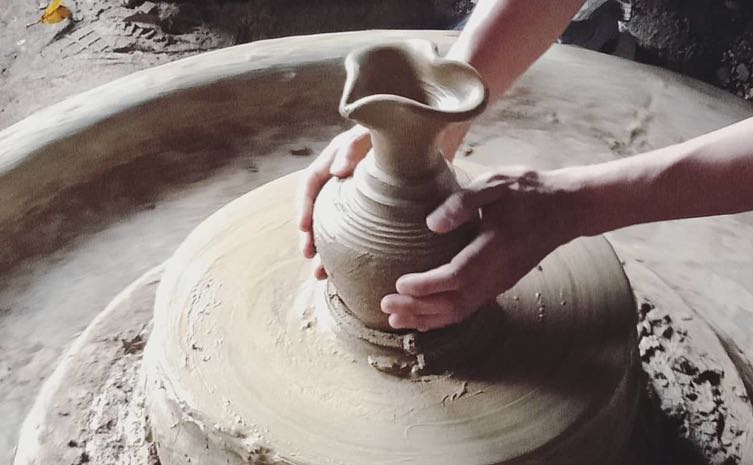 By 4:30 P.M., our driver took us to the Pagburnayan in Gomez St. The place got its name from “bornay” which refers to the local earthenware made in Vigan. Pagburnayan houses several pottery studios which feature this art form. Here, visitors can have a glimpse of the process required to make the bornays. They also sell bornays in various designs, shapes, and sizes for visitors wanting to have them as souvenirs. For those who wish to experience making their own bornays, Pagburnayan also offers pottery workshops for a minimal fee where artisans will guide you on how to process pots using traditional techniques.

At around 5:00 PM, we went to the Vigan City Convention Center. Opened in 2012, this venue, which is considered the biggest convention center in Ilocos Sur (if not Region I), accommodates a number of functions and events such as trade shows and performances.

Upon entering Vigan City Convention Center, one will notice several painted panels on top made by Angono artists. Each panel depicts a key event in the region’ history from Pre-Hispanic until recent years. 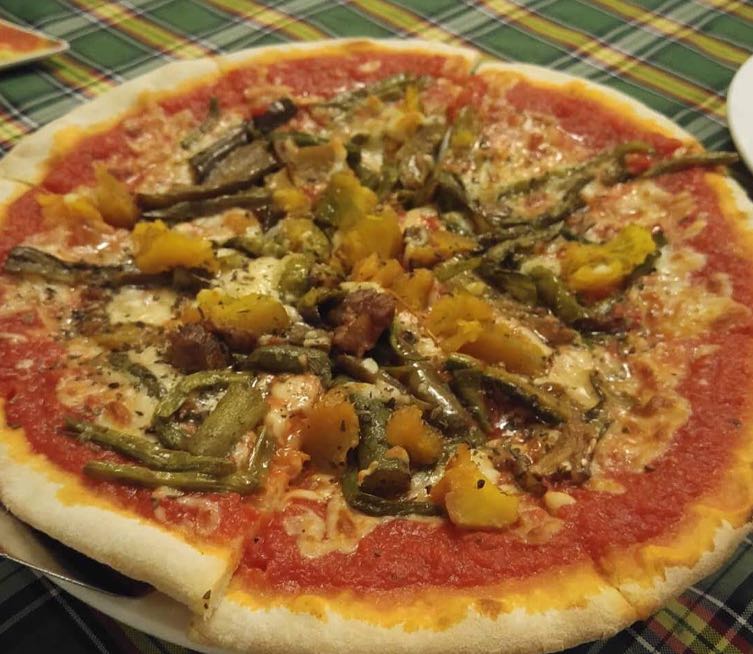 After visiting the Vigan City Convention Center, we headed back to Calle Crisologo. At around this time, the shops were starting to close but the flock of tourists (and locals) seemed to multiply. Everyone wanted to experience the famed street at night. A couple of walking and selfies later, we had a hearty dinner of Ilocano dishes such as pakbet pizza and sinigang na bagnet at Café Leona. Needless to say, it was a good mix of flavor and texture. By 10:00 PM we returned to our accommodation to rest our tired feet from the long fun walks, and to cap off our first day in Vigan.

A lot has been said—and written—about Vigan, but I do believe it is best to experience the heritage city first-hand. That way, you get to immerse yourself in local culture and learn more through interaction with the locals. Beyond the food, museums, and cultural landmarks, what is most impressive about Vigan is the way they were able to preserve the past and merge it with the present. At a time when everything seems quick and disposable, it's good that a few places in our country have decided to go a different route.